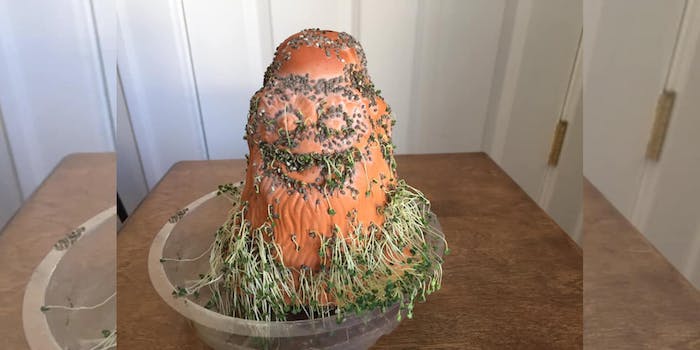 This Gritty Chia Pet is hilarious—and quite disturbing

Few things on the internet are as loved and feared as Philadelphia Flyers mascot, Gritty. But try to imagine him in plant form.

A Gritty Chia Pet is currently drawing equal laughs and dismay on Twitter. Comparisons made to the unfortunate planter include Pizza the Hut from Spaceballs, the Sonic the Hedgehog cake Eddie Murphy made on Saturday Night Live last week, and Chet from Weird Science.

my brother got a Gritty chia pet and things did not go as planned pic.twitter.com/vzaofh7hL8

The original poster wrote that he took the image from his brother, who had shown it on Facebook. The Facebook post indicates that he had spread seeds over the Chia Pet inconsistently and then had forgotten about it. A week later, Gritty was more terrifying than ever.

no i “stole” it from my brother but do fuck off now pic.twitter.com/bNpLXaXgJp

Another Chia Pet, apparently unrelated to the first, has suffered a similar fate, growing a neckbeard instead of a lush head of hair.

With his terrifying appearance, he’s sure to have inspired more than a few nightmares.

Thanks for the nightmares.

This version of Gritty definitely provokes different reactions than the original.

Alternatively, this Chia Gritty isn’t Gritty at all, but Grotty.

“That’s Grotty, the ego shadow (like an avatar) of Gritty that lurks in the hidden grottoes and dark corners of the Wissahickon,” @Michael_Stahler wrote.

Oh yea! That’s Grotty, the ego shadow (like an avatar) of Gritty that lurks in the hidden grottoes and dark corners of the Wissahickon

Whatever it is, most of us can agree on one thing: This is not how Gritty should be remembered.