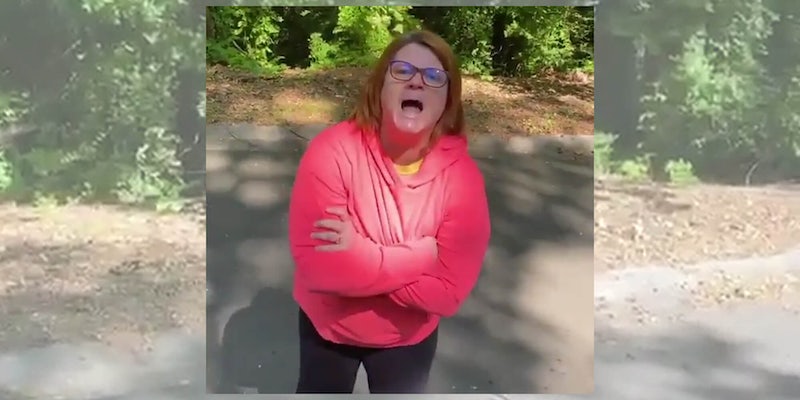 What do Disney movie characters and Karens have in common? Sometimes, they just need to “let it go.”

That’s the advice rapper Cartel WatchMe gave to a Karen who confronted him while he was working in her neighborhood. According to WatchMe’s Instagram post, Curbside Karen accused him of “dumping leaves” on her property, even though he said the company he works for puts down pine straw and doesn’t do anything with leaves.

WatchMe shared an additional clip on Facebook in which he explains to Curbside Karen that he didn’t “dump” anything on her property. He was working on the lawn across the street from hers and blew some leaves off the curb but that it didn’t end up on her lawn. WatchMe tells Karen to call his company if she has a complaint.

That didn’t stop Karen from erupting.

“I don’t appreciate your rudeness and your inability to even have a conversation,” she tells WatchMe. “That’s my property. It is illegal.”

Curbside Karen then reaches the level of ear-piercing vocal fry that is characteristic of Karens everywhere: “Stop dumping on my property! I will call the cops!”

WatchMe keeps his composure throughout the ordeal, mostly amused by Karen’s increasing hysteria.

When he mentions the possibility of going viral, she starts to go quiet.

“Look at you! You turning red, baby!” he continues. “You turning like an apple right now. Let it go! Frozen. Let it go, baby. Elsa, let it go.”

WatchMe originally posted his video on June 5 to Instagram, where it has accumulated a respectable 78,000 views. But it got a second wind when Twitter user @justin_5100 reposted it on Tuesday. The clip has been retweeted 35,000 times and earned a whopping 1.9 million views.

In the replies, Twitter user Roberta Lea pointed out exactly what was so problematic about Curbside Karen’s meltdown.

“Take a picture of the truck, call the company to voice the concern, take documentation of the notification, she could even contact the BBB,” Lea wrote. “Threatening to call the police for a non-emergency situation is the reason why she’s rightfully being called Karen.”