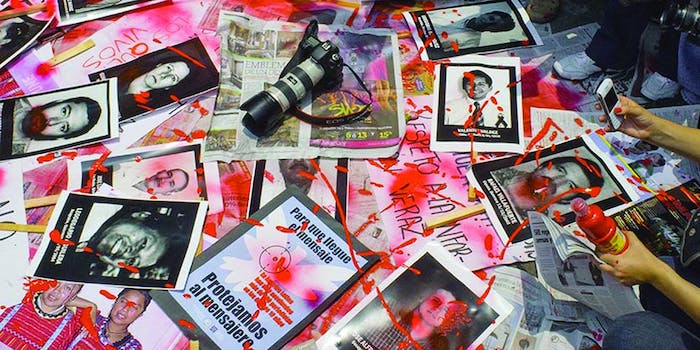 In Mexico, telling the truth can get you killed.

Mexico is one of the most dangerous countries in the world for journalists. Those who report on the activities of corrupt officials or drug cartels are regularly intimidated, kidnapped or murdered. And it’s not just criminals the media has to look out for. Many of the physical attacks on Mexico’s press have been tied to the law enforcement. Publishing the truth about officials who are tied to organized crime can be a death sentence.

Against this perilous background, the website Periodistas En Riesgo (Journalists at Risk) sheds light on the risks of journalists in the United State’s southern neighbor by crowdsourcing information about attacks against journalists, bloggers and social media users in Mexico.

While still in the beta testing phase, the site has already received more than a hundred attacks against members of the press over the past year.


The map was created by Jorge Luis Sierra, a fellowships director at the International Center for Journalists (ICFJ), which seeks to “install a culture of news innovation and experimentation worldwide.” The organization receives funding from the Bill & Melinda Gates Foundation for its work with journalists in sub-Saharan Africa, among other donors.

The types of aggression reported on the Periodistas En Riesgo vary from acts of physical violence to intimidation. One of the more recent reports, filed on Aug. 20, alleges that a teachers’ union (CNTE) in Oaxaca threatened several reporters who’d come to photograph a protest at a gas station. According to the website, journalists witnessed several teachers engaged in looting. The names and photographs of the journalists were reportedly shared among others associated with the alleged looters.

Another report, filed near the end of June, claims that the Attorney General of Coahuila has failed to act after a reporter with Multimedios TV was physical assaulted and his camera destroyed.

The murder of a journalists for local television station in Zacatecas was also reported to the website at the end of last month. Norberto Herrera Rodriguez was stabbed more than 20 times in his home in the town of Guadalupe sometime between July 27 and 28, the report said.

In a recent article for PBS Mediashift, ICFJ fellow Javier Garza wrote about how Sierra’s map was being used to track “physical, psychological, digital or legal” threats against journalists. Furthermore, Garza writes, a public submission platform such as this one could be used to “determine whether national governments are keeping their commitments to protect a free press.”

In Mexico, violence against journalists has reportedly led to a widespread chilling effect on the news. The international community—particularly those charged with monitoring press freedoms, such as the United Nations—often work with governments who say they’ll protect journalists, but fail to follow through on their promises.

Transparency projects like the Periodistas En Riesgo could help shed a light on the threats faced by journalists in Mexico, and help educate others on how to protect themselves in the field.

You can find an interactive version of Sierra’s map on the Periodistas En Riesgo website.