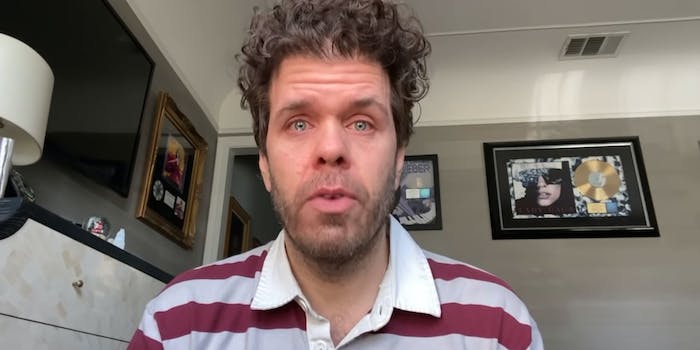 The gossip blogger is now appealing directly to Charli D'Amelio.

As the New York Times reports, Hilton (real name Mario Lavandeira) was permanently banned on Dec. 11 after “repeatedly” violating its Community Guidelines, according to a TikTok spokesperson.

Hilton rose to popularity in the early aughts, reformatting the gossip column into a blog and becoming a controversial source for celebrity dirt. But on TikTok, the 42-year-old is dealing with a much younger audience, which views celebrity through a different lens. While he’s no stranger to starting drama, his tactics apparently haven’t been as welcome.

Back in March, he commented on a TikTok of Charli D’Amelio, who just became the first person on TikTok to hit 100 million followers, asking, “Anyone else think it’s inappropriate for a 15-year-old to dance to this?” This is, of course, pretty rich coming from a man who tweeted out an upskirt pic of a 17-year-old Miley Cyrus.

D’Amelio’s fans quickly descended. In April, a petition to ban him from the app circulated. Some TikTokers have also called him out for making a suggestive comment on a minor’s account.

Though his main account is banned, Hilton posted a series of tearful, pleading videos to his second account over the weekend, in addition to YouTube and Twitter. He said he reached out to D’Amelio and her family directly for help reinstating his account. In a follow-up video Monday, Hilton said TikTok has been an “escape” for him during a tough year, and that he’d made roughly $10,000 in three months as part of TikTok’s Creator Fund.

According to emails between Hilton and content partnerships manager Anthony Fernandez, obtained by the New York Times, Hilton claimed his content was “newsworthy.” However, Fernandez wrote that his violations included “posting content that contains slurs and hate speech, sexual behaviors and nudity, and bullying.” TikTok did not cite any specific videos that violated its guidelines.

As a shining example of what Hilton’s up against, his apology videos have become fodder for parody on TikTok. Creator Tatayanna Mitchell said on Monday: “I don’t know, Perez. Maybe it’s time for you to go to Facebook or something.”