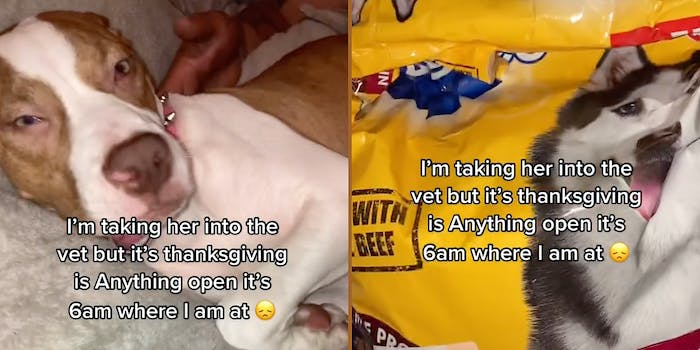 ‘Don’t ever use this dog food’: Distressed dog owner alleges a bag of food from Target injured her dog in viral TikTok

That particular make and brand don't appear on any recall or withdrawal lists with the FDA.

A viral TikTok video shows a distressed dog owner alleging that a bag of Pedigree dog food she purchased may have injured her dog.

@queenbellastips filmed and posted a disturbing video showing her pup in a weakened state. The overlay reads, “I’m taking her in to the vet, but it’s Thanksgiving. Is anything open? It’s 6 am where I’m at.”

While showing her weakened pup, Jasmin, she said, “Don’t ever use this dog food; I don’t know what I did…” The viral clip has more than 14 million views as of press time.

“I normally don’t get this brand, but we were at Target, and we needed dog food, so we grabbed it,” she said tearfully. “I don’t know if I’m regretting it now.” The brand and make of pet food in the video is Pedigree-brand “High Protein.”

Then she shows a video of her poor pup walking gingerly. However, she posted videos detailing the progression of her dog. In one follow-up, she informed people that the dog would be going to the vet and that “she puked it all out.”

In another follow-up, following a vet visit, she said they found the Pedigree dog food was the apparent culprit. Jasmin, who was a rescue, appeared fully recovered.

That particular make and brand don’t appear on any recall or withdrawal lists with the FDA, though it could be a bad batch given the vet’s apparently diagnosis of food poisoning.

The Daily Dot has reached out to Pedigree, its parent Mars, and the TikToker for comment.