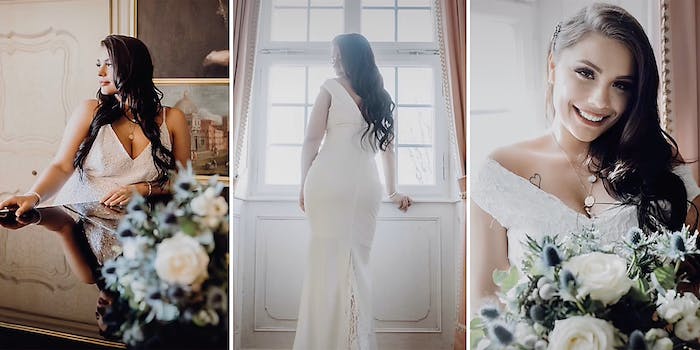 'Worst part is he watched my story and still didn't reach out.'

A TikToker says she staged a fake wedding photoshoot to get a guy to notice her. While the TikToker may be trolling, viewers are praising her.

TikToker @dieschaklin’s humorous video shows a staged wedding photoshoot, including pictures of her and the “groom.” She’s in a white wedding dress, and there’s even a horse in the photos.

Captioned “Worst part is he watched my story and still didn’t reach out,” the 20-second video got over 2.7 million views and 553,000 likes since it was posted on Nov. 18.

The text overlay reads, “Remembering the time I faked my own wedding and had a professional photoshoot so he would reach out.” @dieschaklin is shaking her head and making a facetious sad face in the beginning of the video before it cuts to the fake wedding photoshoot.

In a series of lighthearted follow-up videos, @dieschaklin answers comments on her fake photoshoot video in funny voiceovers, songs, and facial expressions. The facetious tone of her follow-up videos seem to confirm she was joking about faking her wedding to get a guy to notice her.

Some of the 7,365 commenters understood the joke.

“The feminine urge to do this,” @lilithbathbeauty commented.

Others appeared to take her seriously.

“Not me feeling good rn because I know there are crazier women out there,” @schnati_ said.

“What were you gonna say if he reached out? What was the plan bestie?,” another user, @minagrams, said.

The Daily Dot reached out to @dieschaklin for comment.