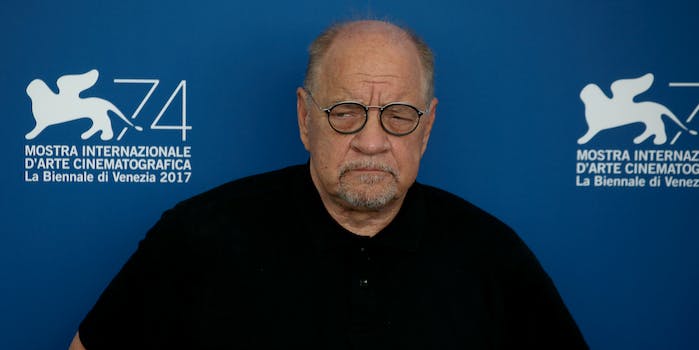 The request came from the distributor of his next film.

First Reformed director Paul Schrader’s Facebook page is a hodgepodge of cinematic insight from someone with decades of experience in the industry as well as a lightning rod for controversy. The latter is once again getting him in trouble after one post led to the distributor of his next film asking him to stop posting for a month.

On Tuesday, Schrader shared his thoughts on the struggles that someone might have with “touching attractive women in your presence if they work for you.” Schrader insisted that while it might be hard, it is possible.

“Is it really so hard to keep from touching attractive women in your presence if they work for you?” he wrote. “Yes it is. The evidence seems conclusive. But it can be done.”

In a follow-up, Schrader added, “The desire to touch is genitively driven. All life seeks contact. Is this such a hard concept to understand? Impulse control? That’s harder.”

A few hours later, Schrader informed his friends and followers that Focus Features, which is distributing The Card Counter, asked him to lay off Facebook for a bit. The Card Counter, which stars Oscar Isaac, Tiffany Haddish, and Willem Dafoe, is also set to debut in competition at the Venice Film Festival next month.

“Focus has asked me to chill on FB for a month,” he wrote. “No problem See you on the other side. Card Counter opens Sept 10th.”

News of Schrader’s temporary exodus from Facebook quickly spread on Twitter as several accounts (including one that screengrabs and shares many of Schrader’s posts to Twitter) sarcastically wondered what made Focus Features ask Schrader to get off Facebook for a bit. One person even imagined the less-than-fun job that someone at Focus Features might have keeping tabs on Schrader’s Facebook page.

While Schrader didn’t mention what prompted him to share his thoughts on “touching attractive women,” his post came just hours after New York Attorney General Letitia James released the findings of a months-long independent investigation, which found that New York Gov. Andrew Cuomo (D) sexually harassed multiple women. The findings painted a hostile and toxic work environment within the Cuomo administration, several instances where several women said Cuomo engaged in “unwelcome and nonconsensual touching” (including a female New York state trooper) or made inappropriate comments, and at least one instance of retaliation when a woman came forward with what she said Cuomo had done to her. The calls for Cuomo to resign (or for the New York legislature to impeach him if he refused) began again, including from President Joe Biden. Cuomo’s response included gaslighting his accusers and releasing a bizarre 85-page response that mostly included photos of himself hugging and kissing other people.

It’s not even the first time Schrader’s frequent Facebook postings have gotten him into trouble. In November 2018, just as the awards push for First Reformed began, Schrader wrote a Facebook post in which he said that producers shot down his idea to hire Kevin Spacey for a film he wanted to direct and that “I believe there are crimes in life but no crimes in art.” Schrader, who deleted the Facebook post about Spacey, didn’t post again until February 2019. In his first post, he wrote that he was now out of Facebook jail and that “A24 requested that I stay off from FB until award season was over.” He also called out Spike Lee for apologizing for defending Woody Allen and defended Spacey’s casting in Franco Nero’s new film.