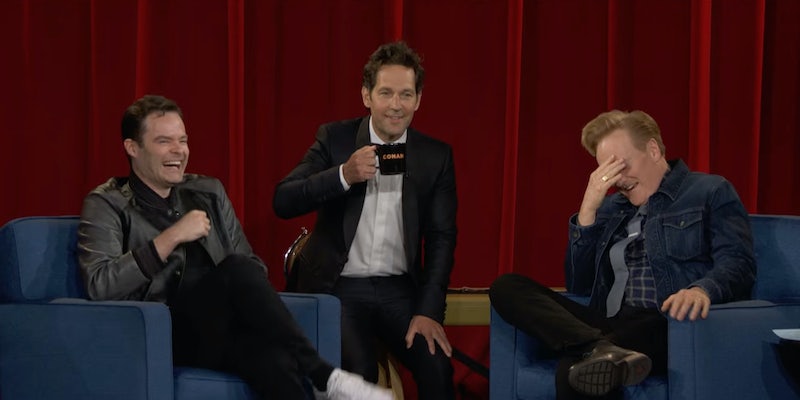 Conan O’Brien is ending his long-running late-night show on TBS on June 24, but before O’Brien takes his final bow, Paul Rudd couldn’t resist pulling the rug from him one last time.

Rudd is known for many things—Ant-Man, playing the heartthrob in Clueless, his apparent lack of aging, and being a premiere meme—but on Conan and O’Brien’s other late-night shows over the years, Rudd is a massive troll. For the past 17 years, starting with an interview promoting the Friends series finale in 2004, whenever Rudd has appeared on one of O’Brien’s TV shows, Rudd promised to show him and the audience an exclusive clip from whatever he happened to be promoting at the time.

Only, instead of that clip, Rudd would show O’Brien a clip from Mac and Me, the 1988 E.T. rip-off that’s widely considered to be one of the worst films ever made. In the scene Rudd brings with him (and it’s the same exact scene every time), a young boy rolls off a cliff and into a lake in his wheelchair as the alien character watches it happen with widened eyes. No matter what Rudd was promoting, whether it was an Ant-Man movie, Anchorman 2. There’s even a compilation of Rudd’s earlier hits on YouTube, and you only need to search “Paul Rudd Mac and Me” on YouTube to discover several more iterations of it; with each one, O’Brien’s exasperation becomes all the more entertaining as he’s seemingly the only person who believes Rudd will actually play the clip he promised.

“It’s now gone onto such crazy lengths where I have shown the clip and then it cuts back and I said, ‘Look, the studio got very upset when I did that, they take clips very seriously,’” Rudd explained to Chris Evans in 2016. “‘The only way they would let me show that clip is if that now I show a clip from the real movie so they’re like, OK, fine’…When I did Ant-Man, I actually had him working and handed him the clip. But it’s just a running joke.”

In O’Brien’s final week, Rudd wasn’t scheduled to be interviewed. Instead, he crashed O’Brien’s interview with Bill Hader as Hader discussed an SNL sketch he and Rudd performed that was cut for being terrible. After explaining what went wrong and that the sketch was filmed despite never airing on SNL itself, Rudd asked if people wanted to see the cut sketch for themselves.

Once again, Conan’s Lucy (Rudd) placed the football (the terrible SNL sketch) out for Charlie Brown (O’Brien) to kick. And once again, Lucy pulled the football away at the last minute (aka showed the Mac and Me clip instead). Conan’s audience, who are more than aware of Rudd’s gag, cheered so loudly you’d think that Rudd was showing something from a new Marvel movie. But this time, O’Brien is cheering along with the audience.

“Whoever dies first, you have to do that at the other one’s funeral,” Andy Richter says off-screen.

“Every time, for years, I was convinced that I would see the real clip because you’re such a genuinely nice person,” O’Brien explained. “And you would say, ‘this movie is really important to me’ and ‘I put my own money into this, and I really care about this,’ and then you’d pull that shit every time.”

According to Rudd, when he first started the Mac and Me gag, he thought the idea of showing a clip from a movie he did felt artificial, so why not show another clip that he felt was very strange instead? And he actually contemplated showing a clip from the 1999 film Baby Geniuses before settling on Mac and Me and offered to show O’Brien what that alternative reality looked like.

And yes, it went exactly how you think it did.

If any of Rudd’s antics have ever convinced you to watch Mac and Me, it’s currently available to stream on Showtime.