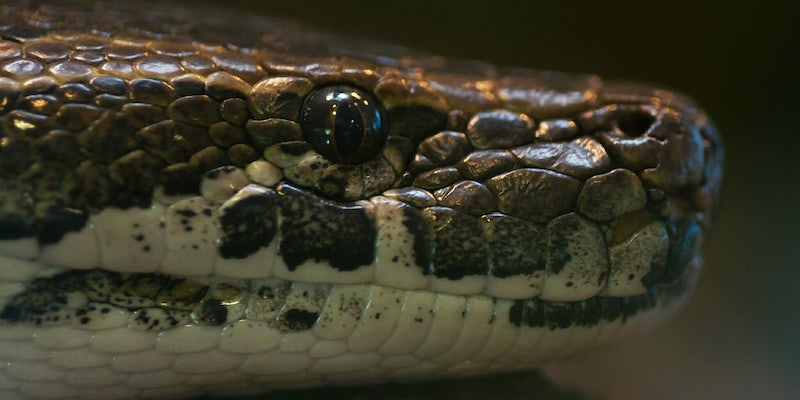 Turns out wrapping a python around your neck is not a great idea.

Snakes are not your friends. They are basically death tubes with fangs. In some parts of the world, pythons are particularly dangerous. You might have heard about the Indonesia woman who was recently swallowed whole by a giant 23 foot long python while working in her garden, or the farmer who met a similar fate last March.

Pythons are constrictors, who kill their prey by coiling around them and literally squeezing the life out of them, so you can see why it might be a bad idea to drape one around your neck. That, however, is exactly what a park ranger in Jalpaiguri, India did when he caught a large python in the Baikunthapur Forest.

Ranger Sanjoy Dutta was posing with the snake as onlookers snapped pictures when it decided to do the thing it was designed by nature to do. It began tightly wrapping itself around Dutta’s arm and then his neck.

#WATCH Narrow escape for Sanjoy Dutta, Range Officer of Baikunthapur Forest in Jalpaiguri after a python he rescued from a village almost strangled him to death while he was posing for selfies with locals. #WestBengal pic.twitter.com/KroJHOCOkk

Luckily, there were enough people there to help, and they were able to unwind the snake.

The video is certainly terrifying, but people on Twitter chose to concentrate on what an obviously poor idea it is to put a giant constricting snake around your neck in order to take some pictures.

So today we all learned not to put giant snakes around our necks.

As easy as it is to make fun of this park ranger, it’s worth noting that people have been posing with snakes draped around them for a long time now. Musician Alice Cooper is well known for wearing a snake on stage during concerts, and wrestler Jake “The Snake” Roberts made an entire career out of it. Snakes are basically the go-to animal when you’re trying to look scary/cool, but now that we all know what they’re capable of, maybe people should consider posing with really intimidating puppies instead.

I mean just check out the jaws on this guy. If that doesn’t strike fear into your heart, what does?