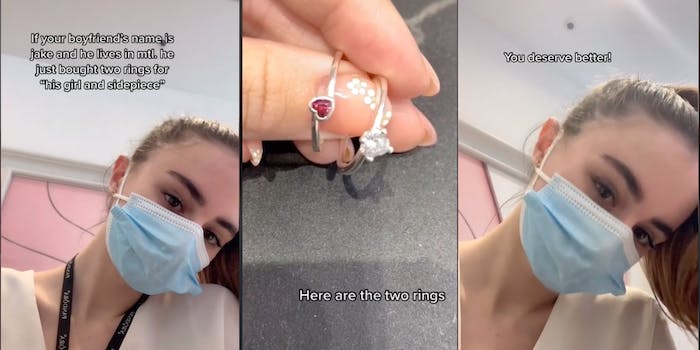 ‘You deserve better’: Pandora employee exposes man who bought rings for his girlfriend and mistress on TikTok

'Jake from Montreal' may be in for a rude awakening.

In the age of the internet, if someone is doing something shady, everybody will know about it.

In this case, it was a guy named Jake from Montreal, who was exposed for buying rings at Pandora for his girlfriend and his mistress— or “side piece,” as reported by the Mirror.

“If your boyfriend’s name is Jake and he lives in mtl. he just bought two rings for ‘his girl and his side piece,'” the poster, TikTok user @ferreiroroche captioned her post.

In the comment section, the Pandora employee, who later reportedly quit her job at the jewelry chain, was praised for her actions.

“I really hope you don’t get in trouble for this cause he needs to be EXPOSED,” @idkusernameundecided wrote.

Another pointed out that this video may have cast unfair suspicion on all of the other guys named Jake in Montreal who were not in fact cheating on their girlfriend.

“Bad day to be living in mtl with a bf named Jake,” @djpickellfanpage wrote.

A commenter who claimed to have also worked for Pandora said this happens all too often at the jewelry store.

“The amount of customers I had doing this when I also worked at Pandora,” @jencysm2 wrote.

In a follow up TikTok, the original poster said she waited until her last shift at Pandora to share the story, hoping to expose the cheater.

“I actually quit last week and waited for my last shift to expose this cheater,” she wrote.

This Jake from Montreal—not to be confused with the wholesome Jake from State Farm—may have a rude awakening on the horizon. A commenter on the second video said she shared the video to a Facebook group for people who live in Montreal that has 40,000 members.

“I added it to my Facebook group for Mtl with over 40k… wonder if someone he knows will see it,” @mtlbyv wrote.