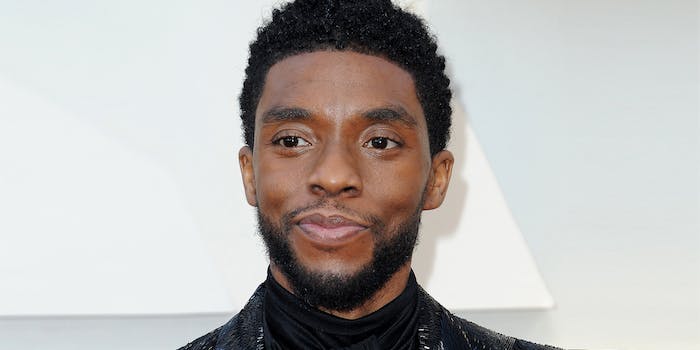 Chadwick Boseman was heavily expected to win—but the award went to Anthony Hopkins.

Even in years when it’s not awarded to the best film of the year, the Academy Awards tends to end on a high note. Best picture is usually the final Oscar of the night, and when it’s announced, it allows everyone involved with that particular film—the producers who win the Oscar, the cast, and all of the crew in attendance—to revel in that moment.

But on an Oscars night taking place after a very unique year, the awards ended on an anticlimactic note with an upset that nobody—especially the Oscar producers—expected that left a sour taste in everyone’s mouths.

Producers Steven Soderbergh, Stacey Sher, and Jesse Collins spent countless hours attempting to shake things up. Most of the ceremony, which included both following CDC protocols and most of the attendees not wearing masks, took place at Union Station in Los Angeles with several satellite stations set up in London, Paris, Sweden, and Australia for those who weren’t able to travel. It switched the order of awards, which resulted in Chloé Zhao’s historic directing win for Nomadland occurring an hour into the ceremony. All of the best original song performances were pre-taped and aired before the Oscars even started. (There was a scripted bit where Glenn Close did “Da Butt” dance from School Daze!)

But then things started to go off the rails when Oscars’ antepenultimate award was best picture, which was shocking not because of which film won (Nomadland, as expected) but rather because best picture was no longer the final award of the night. With the next award going for best actress (Frances McDormand for Nomadland), that meant that the final award of the night would be given to best actor—which most prognosticators suspected would be posthumously awarded to Chadwick Boseman (who died in August from colon cancer) for his final performance in Ma Rainey’s Black Bottom.

If you ever thought that the Oscars producers knew the winners ahead of time, let the presentation of the Academy Award for best actor dispel you of that notion. The producers, likely suspecting that Boseman would win an award he’s been favored to win all awards season, rearranged the order in which Oscars were handed out so that the night would end with Boseman’s win and a speech that would celebrate the actor’s life. (Taylor Simone Ledward, Boseman’s widow, has been given several moving acceptance speeches on Boseman’s behalf throughout the awards season.)

But then Joaquin Phoenix, last year’s best actor winner, announced that Anthony Hopkins won the Oscar for The Father over Boseman, a move that some saw coming but most didn’t expect. Hopkins, who is now the oldest person to win an acting Oscar and lives in Wales, didn’t attend the Oscars at the satellite ceremony at the British Film Institute in London and had no plans to, telling reporters after he won the BAFTA a couple of weeks ago that while he was vaccinated, he wouldn’t be attending the ceremony. Phoenix accepted the award on Hopkins’ behalf. And then the Oscars just…ended.

It’s a perfect storm of chaos, one that’s akin to the La La Land and Moonlight best picture mix-up from 2017 but with a much less satisfying ending. First, there’s the award order switch, a move that built up even more anticipation for an award most expected to go to Boseman. Then Phoenix refused to read the teleprompter and noted that “it’s a shame that we have to choose just one” winner. Hopkins, who didn’t attend the Oscars because of factors like his age and COVID risks, wasn’t there to potentially smooth things over with an awards speech. The Oscars, for the second year running, did not have a host, so after Phoenix accepted the Oscar on behalf of Hopkins, the camera was awkwardly thrown to Oscars musical director Questlove to end the show.

The final moments of the 2021 Oscars leave us with a bad taste where nobody wins, no matter who you wanted to win. If you wanted Boseman to win, there’s the disappointment of the Academy not awarding him for the best performance of Boseman’s all-too-short career, knowing full well that Boseman will never get another chance to win. If you wanted Hopkins to win the Oscar for one of his all-time great performances, this win now has an asterisk over it because the Oscars attempted to build momentum for a victory that never arrived—and Hopkins got caught in the crossfire.

Some pointed to an NFT of Boseman in an Oscar gift bag as an insult to injury.

“It wasn’t just the Chadwick loss,” film critic Robert Daniels noted. “It was the back-to-back losses by two Black actors who were touted as front runners in lead categories. It perpetuated the history of voters favoring white performers in lead categories, and absolving voters of that isn’t the route I’d take.”

Most people, however, put the blame squarely on the Oscars producers who gambled on a win they thought would happen that, as evident by the ceremony, did not.

On Monday morning, Hopkins released a video with his acceptance speech in which he paid tribute to Boseman.

“Here I am in my homeland in Wales,” Hopkins said. “And at 83 years of age, I did not expect to get this award, I really didn’t. I’m very grateful to the Academy, and thank you. I want to pay tribute to Chadwick Boseman, who was taken from us far too early. And again, thank you all very much. I really did not expect this. So I feel very privileged and honored, thank you.”