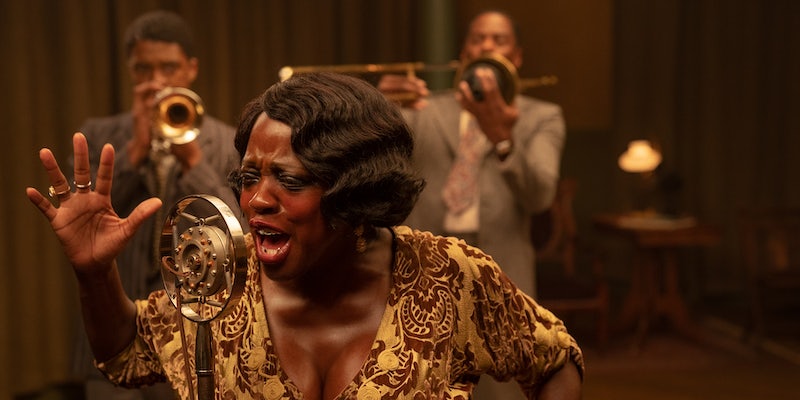 Viola Davis and Chadwick Boseman star in this fiery drama about a 1920s blues singer.

“The greatest part of what’s left of my career is making sure that August [Wilson] is taken care of,” Denzel Washington told the New York Times earlier this year. He wants to adapt ten of Wilson’s plays for the screen, beginning with Fences in 2016. Ma Rainey’s Black Bottom is the second film in the cycle, helmed by screenwriter Ruben Santiago-Hudson and director George C. Wolfe. Set over the course of one afternoon in 1927, it’s a tale as old as time: a temperamental artist (blues legend Ma Rainey) leveraging her talent and star power to make life difficult for everyone around her. Viola Davis stars in the title role but Chadwick Boseman steals the show as Levee, an ambitious young trumpeter who wants a recording contract of his own.

Nicknamed the Mother of the Blues, Ma Rainey was known for her powerful voice and unapologetic attitude. She made iconic recordings of early jazz standards alongside original tracks like “Prove It on Me Blues,” which directly referenced her affairs with women. The film’s title comes from a raunchy dance track that Ma performed countless times while touring. But recording “Ma Rainey’s Black Bottom” is a surprisingly difficult task, as Ma clashes with her manager (Jeremy Shamos), the white studio boss (Jonny Coyne), and her own band. Problem number one: she’s determined to have her nephew (Dusan Brown) record a spoken-word intro, even though he’s totally unsuited to the task. Meanwhile Levee wants to record his own arrangement of the song, convinced it’ll be more popular than Ma’s old-fashioned original.

Ma Rainey’s Black Bottom has a very obvious “adapted from a play” vibe, almost exclusively set in two rooms: the recording studio where everyone struggles to keep Ma Rainey happy, and the run-down rehearsal room where Ma’s band argue and tell stories. Director George C. Wolfe (The Immortal Life of Henrietta Lacks) is best known for his work in theater, and keeps things simple in this self-contained drama about clashing egos and the complicated racial dynamics of 1920s America. Sepia-toned lighting and stylized exterior shots add to the stagey feel – a strategic choice because in a more realistic movie, we might balk at characters delivering impromptu monologues about traumatic events.

Most of these characters are trying to do their job and avoid trouble, including Ma’s sexy young girlfriend Dussie (Taylour Paige). It’s not exactly a romance for the ages. The older, more experienced members of the band (Colman Domingo, Michael Potts and Glynn Turman) become increasingly frustrated by Levee’s posturing and ill-advised flirtation with Dussie. This is just their day job, while Levee wants to be a star. The film doesn’t linger on Ma’s backstory, but we can easily infer she’s had a hard life. Her cantankerous behavior is, to a certain extent, understandable. She knows she’s a star, and the only reason the studio keeps her around is because she makes money. In the absence of true respect, she’ll accept fear instead.

Decked out in smudged makeup, silver-capped teeth and a fat suit, Viola Davis cuts an imposing figure. She actually gets less dialogue than the men, but that isn’t an accurate way to measure her influence. Everyone here is trapped in her orbit, catering to her whims and trying to dodge her mercurial moods. Everyone aside from Levee, that is. Boseman is likely to receive an Oscar nod for best actor, putting him on equal footing to the film’s title character. While Ma Rainey is a famous historical figure portrayed with volcanic energy by Davis, Levee arguably gets a more interesting role. Boseman’s electrifying performance unpeels layer upon layer of Levee’s life: his love of women, his experience with violent racism, his burning desire for artistic success, his conflicted relationship with his bandmates. Some of the best scenes are just him and the guys shooting the shit in their rehearsal room.

As Boseman’s final movie, Ma Rainey’s Black Bottom lands differently than it might have done under other circumstances. But Boseman’s performance lives up to the hype. Levee is a magnetic presence, full of drive and passion, in a film that packs plenty of compelling ideas into a tight 90-minute runtime.

Update, Dec. 18 7:40am CT: This article was corrected to state that Chadwick Boseman is likely to receive a best actor nomination.

WATCH NEXT: The Evocative Costume Design of If Beale Street Could Talk.