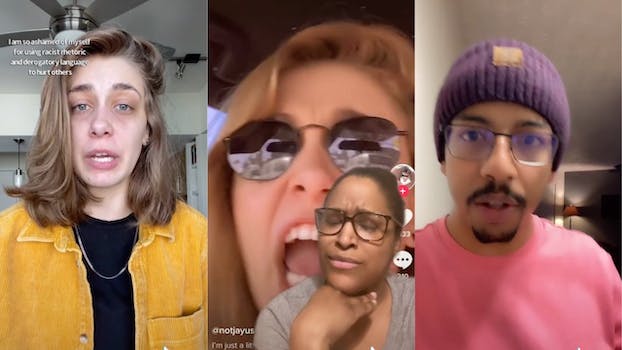 Popular TikToker accused of ghosting, using Black creators after promising to give them a platform (updated)

'I've never felt this used, emotionally drained, and manipulated in my life.'

Isabella Avila, known on TikTok as @OnlyJayus, who was once called out for racist texts and attacking a creator with racial and anti-gay slurs, is again in hot water for allegedly ghosting and using Black creators.

Avila, who is primarily a humorous science and psychology creator with 13.5 million followers, posted an apology for the texts earlier this year, though many Black creators have considered it inauthentic. The video is shown as “part 1,” and a “part 2″— which is said to discuss a commitment to signal boosting Black voices—was reportedly posted. The second video appears to have been taken down. In a follow-up video, they later claimed they read a book on antiracism.

Two prominent Black TikTokers, @auntkaren0 and @seansvv, are accusing Avila of not following through on their promise to amplify Black voices.

Starting in April, @auntkaren0 started posting about her experience with Avila, claiming that they suddenly ghosted her after promising to collaborate.

“Are Black people just tokens to use when you’re ready to play?” she asked. “What bothers me the most, I really gave you an opportunity.”

Later, Avila sent her a message with an apology for “ghosting” her, saying they had a “chaotic schedule” and that they “forgot.” But then, they told @auntkaren0 that they don’t want to work with her because she went public with her beef.

“Instead of just apologizing, you’re going to put it on the Black girl,” @auntkaren0 said. In response to Avila’s comment telling her that she should have followed up with them, @auntkaren0 proceeds to show emails with Avila that seemingly prove that she did try to do so.

Avila allegedly made a rant video about @auntkaren0 on their alt account, @notjayus, though they never named her handle. In another video on her account, @auntkaren0 reacted to Avila’s frustrated response to her videos. @auntkaren0 doubles down on her assertion that she did try to follow up with Avila, despite their claim that “instead of hitting [them] up again, [she] made seven fucking videos about it.”

In another TikTok, @auntkaren0 shared a message from Avila in which they admit to not holding up their end of the bargain.

A commenter later asked @auntkaren0, “How many videos you gon make about the same person???” She replied, suggesting Avila has been actively trying to conceal their lack of follow-through.

“@Onlyjayus said they wanted to work with Black content creators, and when they reached out to work with me, they ghosted me, then tried to make me look like an angry Black woman,” explained @auntkaren0 in an email to The Daily Dot. “They belittled me when I called them out on it, tried to make me look like a liar, and toxic. They don’t deserve their platform, and TikTok shouldn’t allow someone like them on the app.”

Now, another TikTok creator, @seansvv, is seemingly calling out “problematic” Avila, saying he “wasted two months of [his] own time” trying to help them.

“I’ve never felt this used, emotionally drained, and manipulated in my life,” @seansvv said in a video. “Do you know how much empathy and patience and tolerance it takes to privately speak with a creator that has had a problematic past and said they were going to address it privately and then publicly?”

He does not refer to Avila by name, but commenters seemed to agree that it was about them. In a statement to the Daily Dot, @seansvv confirmed his experiences were with Avila. He said came to the decision to make his video after giving them “2 months to take initiative.” He said he set up Zoom calls and sent them academic materials, but that they ignored his help.

“I realized that they were spending more time on posting problematic content and ‘couldn’t be bothered’ to respond and take initiative,” @seansvv said in a DM to the Daily Dot. “So it became clear that their priority of addressing their racism and ableism did not eclipse their daily posting.”

In a follow-up to his first video, @seansvv discusses Avila’s apology, using a blurred out screenshot that appears to match Avila’s first apology video.

In the same video, he points out the missing “part 2” of Avila’s apology and features another TikTok that claimed the original apology was ghost-written. The alleged ghostwriter @zandertheempath also came out with a video, saying they felt used.

@seansvv elaborated on the issues he had with Avila’s initial apology in his message to the Daily Dot:

“An apology has several crucial parts. And the original lacked pretty much all of these elements. And even after Zander ghost wrote the majority of the apology, Isabella ended up deleting the portion that included their promise to all BIPOC.”

When asked if Avila ever provided an explanation to him, @seansvv said that they used their busy schedule and ADHD as an excuse. He said the latter reason was not a good excuse because it “casts the entire community in a skewed light. Especially since I’m a part of that community.”

He also called their excuses “ironic” because they had time to scrub references to the accusations from their page and others’ accounts.

“They had time to delete comments holding them accountable, report videos for “harassment” when they were spreading truth (not lies), and film videos,” @seansvv said. “Rather than respond to the 2 people who were trying to help them”

There is a new petition for TikTok to ban Avila, started by @auntkaren0. The petition had received over 41,000 signatures on June 16.

In a video posted to their second alt account, @icantbelieveitsnotjayus, Avila appeared to mock the petition, saying “Oh no, a petition to ban OnlyJayus on TikTok? What am I gonna do?”

At the time of their video, the petition apparently had 35,000 signatures, which they called “cute.”

“If you can get 13.5 million signatures on this petition, the only way that TikTok would ever ban me, I’ll ban myself,” they said in the video.

They said they were so confident that it wouldn’t garner that many supporters that they were going to buy the petition more views “so more people would see it.”

They concluded the video with a TikTok audio of a melodic laugh, often used in a mocking manner.

Avila has yet to directly respond to @seansvv’s accusations. The Daily Dot has reached out to Avila for comment.

This story has been updated to include comments from @auntkaren0 and @seansvv.