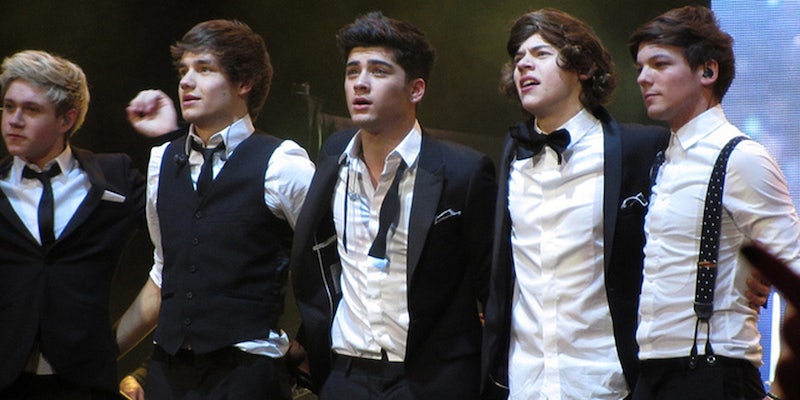 One Direction fans are right to be outraged by GQ

When a magazine treats you like oozing sexual garbage, profanity is an absolutely valid response.

On Wednesday, teenage One Direction fans opened the newest issue of British GQ to find they’d been described, in no uncertain terms, as a collective of vaginal wetness. “A dark-pink oil slick that howls and moans and undulates,” wrote Jonathan Heaf.

Thing is, the fans were pissed already. A day earlier, GQ had taken great delight in mocking the barrage of rape threats, death threats, and other various and sundry insults the magazine received on Twitter in the wake of their profile of One Direction. “Hell hath no fury like a Directioner scorned,” they snarked, reproducing a number of tweets for their audience’s titillation. And indeed, the tweets were vicious, vociferous, and angry. Fans were outraged at the way GQ had, in Harry Styles’s words, “cornered” the 1D singer, hounding him about how many people he’d slept with until he was forced to awkwardly answer. But what GQ emphasized, and what the media seems to have run with, are the over-the-top responses from the fans. “What hath GQ unleashed?” opined the Independent.

In and around the men’s mag’s coy preview of the band and its members was condescension and sexualization of the fans themselves. But when the first full scans of the article appeared on the Internet Tuesday, fans learned exactly how deep GQ‘s misogynist portrayal of the fanbase actually went.

As we pointed out, it’s always too easy to attack teenage fangirls, especially when they’re communicating through the naturally hyperbolic language of Tumblr fandom, where caps lock is de rigueur and telling someone you want to stab her in the uterus is an expression of mild annoyance. Anyone who’s spent two minutes on Tumblr quickly realizes this is a core part of current fandom culture, as pivotal to fangirl modes of expression as a cowboy hat is to a member of the NRA. Directioners regularly react to each other the same way they reacted to GQ. It’s not always pretty, but it’s definitely not something that a group of 30-year-old Conde Nast editors could reasonably feel threatened by.

What is threatening, however, is the way that the GQ article treats female sexuality: as something animalistic, primal, out of control, a giant quivering peach, ripe for eating by GQ‘s hetero male readership. And this is what no one is saying about fangirls’ response to GQ: Sending profanity-laced messages that assert strength and power against the writers who treated them like oozing sexual garbage is an absolutely valid response. 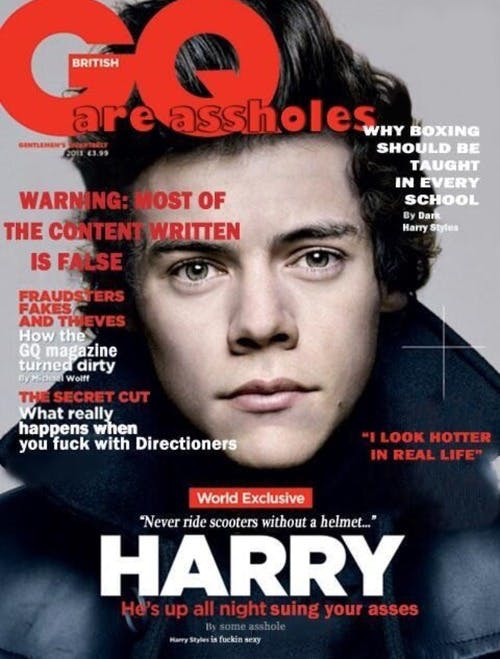 Today, a blog post appeared on the New York Times website. It’s called “I Do Not Want My Daughter to Be Nice,” and in it, mother Catherine Newman explains exactly why she stays silent whenever her daughter is rude to strangers:

I bite my tongue so that I won’t hiss at her to be nice. I tell you this confessionally. Because do I think it is a good idea for girls to engage with zealously leering men, like the creepy guy in the hardware store who is telling her how pretty she is? I do not. “Say thank you to the nice man who wolf-whistled!” “Smile at the frat boy who’s date-raping you!” I want my daughter to be tough, to say no, to waste exactly zero of her God-given energy on the sexual, emotional and psychological demands of lame men — of lame anybodies. I don’t want her to accommodate and please. I don’t want her to wear her good nature like a gemstone, her body like an ornament.

If you’ve paid any attention to the press coverage of One Direction over the past few years, you’ll note that there’s absolutely nothing new in the portrayal of the band. Comparison to the Stones, check. Amused bafflement at the band’s ability to maintain its laid-back style amid the zealotry of the fandom, check. Focus on Harry Styles with the other members serving mostly as background to his floppy hair, check.

But the fandom—oh, the fandom. The following are quotes taken from GQ‘s article, which doesn’t hit shelves till this weekend:

[B]y now, we all know the immense transformative power of a boy band to turn a butter-wouldn’t-melt teenage girl into a rabid, knicker-wetting banshee who will tear off her own ears in hysterical fervour when presented with the objects of her fascinations. Hasn’t this spectacle of the natural world—like the aurora borealis or the migration of wild bison across America’s Great Plains—been acknowledged? It was Keith Richards, after all, who testified in the documentary Crossfire Hurricane to “rivers running down the aisles”. …

Inside the venue, a hormone bomb has gone off: 20,000 females all turning themselves inside out, some almost literally… I’m scared, bewildered, and ever so slightly deaf.

For GQ, the extra illumination only serves to spotlight the astonishing scenes: an ocean of 20,000 wide-opening mouths, hundreds of pleading white eyes, 40,000 palms raised skywards, a dark-pink oil slick that howls and moans and undulates with every impish crotch-thrust from their idols’ plinths. Thousands of female fans caught on the cusp of their own sexual awakening. … Behind me I hear the shrill sonic boom of a whole generation of women coming of age.

Longtime fan Cherrybina fumed on Tumblr, “I want girls to be furious at the rampant misogyny and absolute contempt for teenage girls in this article.” She notes that “the phrase ‘teenage girl’ was an insult long before 1D came along.” But the mockery isn’t just denigrating—it’s dangerous. As the Metro fears for the editors’ safety and the Telegraph laments the evolution of the fangirl, GQ and the rest of the media have decided that women reacting in anger to a male journal that’s aggressively, uncomfortably sexualizing them and their idol is more pernicious than the original article itself.

That irony—that the media can describe fans wholly in terms of their vaginas, reduce the fan’s interest in their idol to being purely sexual, and then berate them for their anger in response—speaks to a core part of rape culture. It’s the part that Newman is aware of when she lets her daughter engage in rudeness. It’s the part that tells women that they must at all times be polite and well-behaved. As the blogger Fugitivus points out, the continual cultural reinforcement that women are to be passive, never to fight back, argue, yell, or stand up for themselves is part of the reason that women don’t fight back, argue, yell, or stand up for themselves when they become victims of actual sexual violence.

Here at the Daily Dot, we have done our fair share of hand-wringing over the One Direction fandom: over its tendency to make up rumors, give itself victim complexes, and engage in internalized misogyny and homophobia. But it’s a perpetual myth, proved false time and again through generations of fandom, that the women who join together in these communities of worship aren’t learning to think critically, to find their own voices, and become strong. And anyone who thinks Directioners aren’t learning these things hasn’t been paying attention.

That’s what they’re saying beneath the profanity: We’re not your squealing borg of sexual energy waiting to give ourselves to you the moment we’re legally available. We don’t have to be nice to men like you.