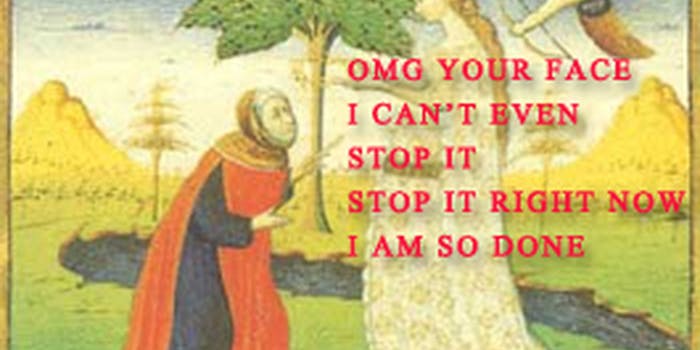 "Crying!" "Boom, my ovaries!" "I can't even." Whether they realize it or not, innumerable fans on Tumblr are collectively evolving a 700-year-old poetic tradition.

“My daughter has been acting strange the past few months,” wrote a parent on Yahoo Answers recently. “She’s always on this website called Tumbler. … Sometimes she says strange things like “my feels” or “my cries.” … Yesterday she was crying because of shipping. Is shipping some kind of drug term or a cult? I don’t want my daughter involved in negative things like this.”

Don’t worry, was the general consensus of respondents to the worried father. Your daughter’s not in a cult—she’s just in fandom.

Fandom has always evolved its own language to talk about the things it loves. With Tumblr, that language has spawned an enormous culture built around intense emotion expressed in specific ways.

But do “feels,” “all my cries,” and “omg your face I can’t even” all have a larger background context outside of ships, One True Pairings, and reblogs?

One high school English teacher seems to think so.

A few weeks ago, a student in Elise Marks’s AP English class at Piedmont High School in Piedmont, Calif., made a Tumblr post about a comment Marks had made in one of her classes. Marks—Dr. Marks, to her students—had compared the language of Tumblr to the language of classic love poetry.

Marks’s discussion centered around Petrarch, the 14th-century Italian creator of, yes, the Petrarchan sonnet form. Petrarch famously fell in love with a mysterious, married woman known only as “Laura.” For all intents and purposes, Laura was to Petrarch as celebrities and fictional characters are to members of fandom: unavailable, unattainable, perfect, and revered.

“The links to Tumblr are definitely striking,” Marks told the Dot in an email:

The poems are oxymoronic: love is simultaneously an ecstasy and an agony. Laura’s perfect beauty brings him joy, but the fact that he can never have her feels like “a wound,” “a grief,” a “constant death.”

A couple examples I saw on Tumblr just from yesterday: “What hurts the most? Knowing I will never be anything more than just a crazed fan to them when they’re my world,” and, “He broke my heart … and he doesn’t even know it.”

Marks sees a direct connection between the conflicting, even assaulting language Petrarch uses in speaking of Laura and the similarly hyperbolic, paradoxical language of Tumblr:

Whether it’s Benedict Cumberbatch, Tom Hiddleston, Harry Styles, or Kili the Ridiculously Hot Dwarf, the beloved celebrity is “perfect,” “beautiful,” “addictive,” “overwhelming,” “everything to me.” But because he’s unattainable, he causes deep suffering: “you Life Ruiner!”; “You bastard, why are you doing this to me?!”; “I can’t even deal … I’m so done!”; “Crying!”; “Boom … my ovaries!”; or just simply, “Dead!”

Writer Isabel Cole echoes this sentiment. In a review of One Direction for One Week One Band, she declares, “I am very angry at every member of One Direction, all the time,” and then wends her way through the complicated love/hate relationship of fans to their idols. Referencing Ani DiFranco’s song “Untouchable Face,” she asks:

Has anyone so artfully conveyed what it is to hate someone with every cell in your body for the crime of not loving you the way you could love them, given the chance? Is there a better summation of that brutal internal battle than “fuck you for existing in the first place”? That’s a perfect line.

Marks agrees. The exclamation “Your face!” sums it all up: a celebration of ideal beauty, an accusation of (unintentional) cruelty, a cry of pain.” 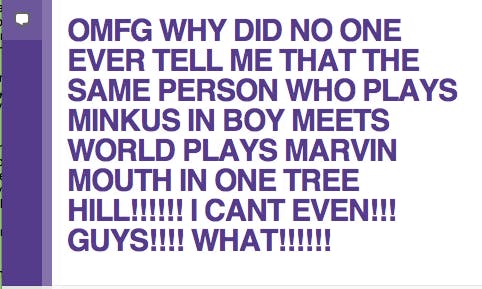 Marks tells the Dot that the collectively shared bliss of agony is all a part of the poetic experience, and, crucially, an expression of linguistic power:

The suffering itself becomes a sort of pleasure—when it’s shared. The same thing happened with Petrarch’s sonnets. Laura may have ignored them, but other poets adored them. They became so popular across Europe, Petrarchanism became the dominant poetic style for nearly 300 years, with almost every poet (including Shakespeare) emoting about the “sweet suffering” of unrequited love.

On her own Tumblr, Cole speaks for all Directioners—and articulates the zeitgeist of Tumblr—when she reblogs a gifset of 1D member Zayn Malik, and asks, “i literally, like, isn’t this illegal? isn’t this against a code of something, isn’t there a law against it? why isn’t there a change.org petition to STOP ZAYN MALIK’S HORRIBLE FACE?” The post Cole is reblogging has over 10,000 notes full of Tumblr’s rapturous despair.

“On Tumblr, instead of suffering alone, people get to commiserate. And feel connected,” Marks explains. “[E]ven if the adored celebrity is callously … ‘ignoring’ them, other Tumblr fans will listen to their pain, and appreciate the passionate, wonderful, often hilarious wit they use to express it.”

Cole calls this paradox of idolatry “too real and the perfect fantasy.”

[T]hose contradictions reinforcing each other, colliding at the precise unbearable intersection of love and self-hate, where it’s all too much and never enough, and I’m so mad about it, and it’s become so important to me.

The paradox of idolatry has likewise become “so important” to millions of fans on Tumblr that they’ve evolved their own language—one might even say their own new form of poetry, complete with keymashing and invented words.

Whether they realize it or not, Cole, Marks’s students, and innumerable fans on Tumblr are collectively evolving a 700-year-old tradition.