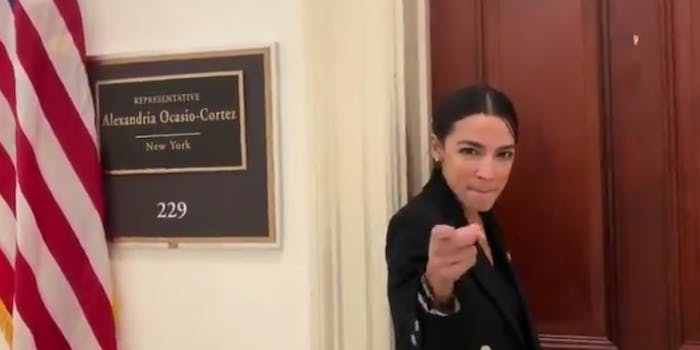 Ocasio-Cortez dances all over GOP haters in new video

Newly elected Rep. Alexandria Ocasio-Cortez (D-N.Y.) responded to an attempt to smear her over a video of her dancing in college by posting another dancing video on Friday afternoon.

On Thursday, a Twitter account shared a video of the new lawmaker dancing, calling her a “clueless nitwit” and incorrectly saying the video was from high school.

The video, where Ocasio-Cortez and other students recreate the dance scene in The Breakfast Club, is actually from Boston University’s Howard Thurman Center, where she went to college.

Soon enough people found the video (and apparently loved it). Now there is even a Twitter account that posts her dancing moves over different songs.

In response, Ocasio-Cortez tweeted out a video of herself dancing to War by Edwin Starr outside her congressional office.

“I hear the GOP thinks women dancing are scandalous. Wait till they find out Congresswomen dance too!,” she wrote on Twitter, adding a dancing woman emoji. “Have a great weekend everyone :)”

Rep. Ilhan Omar (D-Minn.), who was also sworn into Congress on Thursday, enjoyed the clap back.

If we can't dance it's not our revolution. 💁🏽‍♀️ https://t.co/SZGWn1hcLw

The New York lawmaker’s response to the attempted smear was also taken well by people online.

get this woman a shield https://t.co/F0uro8D8Zp

I LOVE this congresswoman. ❤️ https://t.co/rbNpom7pOc

What’s the opposite of getting ratio’d? Cause AOC might be breaking the internet. https://t.co/NibHXfYJm6

She is my favorite human. https://t.co/WQ6cpN7UWK