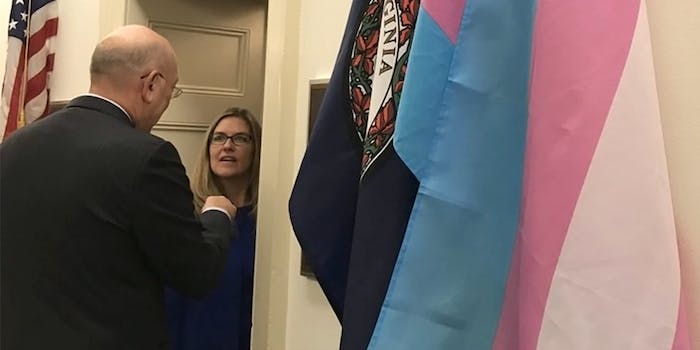 It is the first time the trans flag has been displayed by a member of Congress in the capitol.

In a congressional first, newly sworn-in Rep. Jennifer Wexton (D-Virg.) is displaying the transgender flag outside of her office, drawing the praise of LGBTQ activists and allies.

Wexton defeated two-term Republican incumbent Barbara Comstock in November, and the two couldn’t be more different. While Comstock voted in the past to deny adoption rights to same-sex couples, Wexton is a proud and loud ally of the LGBTQ community.

Wexton hung the trans flag next to the Virginia state flag within hours of being sworn in, signifying her intent to fight for the transgender community. “The trans community has been under attack,” Wexton told the Washingtonian. “I wanted to show my solidarity because we are talking about my friends and family.” Wexton is the aunt to a transgender niece, so for her, the fight is personal.

Many people expressed online that they felt a new hope when they saw the trans flag outside a congressperson’s office. After so many attacks from a conservative-controlled government, it is an enormous relief to see that there’s at least one person in Congress who cares enough about trans people that she wants her support to be one of the first things you see coming into her office.

I’m obviously not on the Hill today but this would 100% make me cry. And I can confirm she’s the first one to display it on the Hill. https://t.co/vymzQfN5kZ

Congresswoman Jennifer Wexton! One of her family members is trans, and she's hanging the flag because of the government screwing up trans rights. https://t.co/md700Cswgp pic.twitter.com/dMd3NkoRkI

Narissa Rahaman, a regional field organizer for the Human Rights Campaign, which helped get Weston elected, also tweeted about the flag. “Helping elect @RepWexton was a privilege! But seeing this flag—the only trans flag on the Hill— outside her office left me speechless and with tears in my eyes!” she wrote. “To all her volunteers: the flag is there because of you & for you! Change is here!”