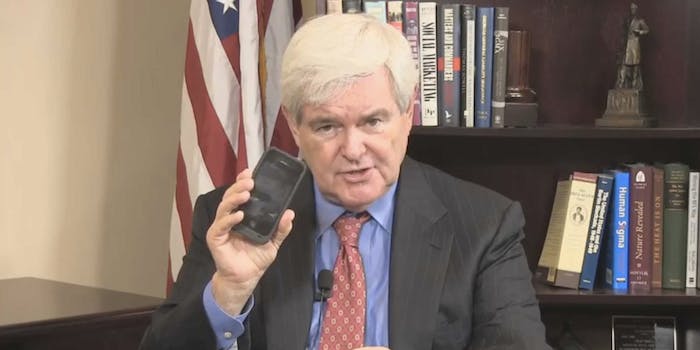 Newt Gingrich, by his own admission, is "really puzzled." He just can't figure out what to call this thing.

Newt Gingrich, by his own admission, is “really puzzled.”

He just can’t figure out what to call this thing.

In a bizarre new YouTube video, the former congressman and Republican primary candidate for president of the United States, a self-proclaimed man of “big ideas,” holds up an iPhone.

“Here at Gingrich Productions, we’ve spent weeks trying to figure out, what do you call this?” he asks.

“You probably think it’s a cellphone,” he speculates. “But think about it. If it’s taking pictures, it’s not a cellphone.”

At no point in his video does Gingrich consider the term “smartphone,” the commonly used phrase for such devices. It’s a term that returns more than 600 million Google hits.

“This device is something new and different,” he says, gesturing with what appears to be an iPhone 4 or 4S, a device originally released in 2010.

According to Google search records since 2004, queries for the term “smartphone” utterly dwarf those for “Newt Gingrich.”

Regarding the term smartphone… twitter.com/newtgingrich/s…