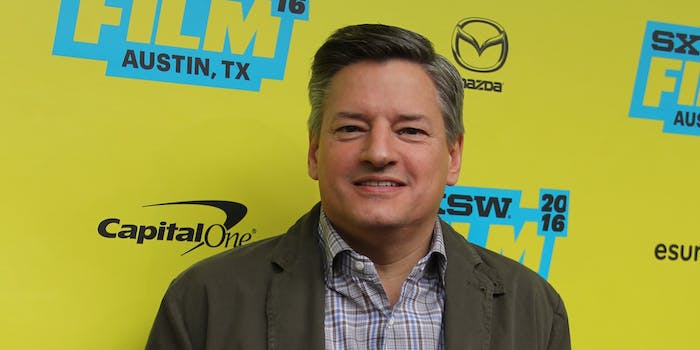 Netflix employees are planning a walkout in protest against Chappelle's comments.

The controversy continues to build around Dave Chappelle‘s new Netflix special The Closer, with Netflix’s co-CEO Ted Sarandos defending the decision to give Chappelle a platform. His latest statement arrived amid plans for a staff walkout organized by transgender Netflix employees and allies.

In an internal email published by Variety, Sarandos acknowledged the anger and disappointment felt by many Netflix staffers, who objected to the transphobic themes in Chappelle’s special. However, Sarandos also claimed that The Closer wasn’t causing “real-world harm,” making a rather bizarre comparison between Chappelle’s comedy and violent video games.

“With ‘The Closer,’ we understand that the concern is not about offensive-to-some content but titles which could increase real world harm (such as further marginalizing already marginalized groups, hate, violence etc.) Last year, we heard similar concerns about 365 Days and violence against women. While some employees disagree, we have a strong belief that content on screen doesn’t directly translate to real-world harm.”

He went on to say that “violence on screens has grown hugely over the last thirty years, especially with first party shooter games, and yet violent crime has fallen significantly in many countries.” This doesn’t really make sense in the context of a comedy special, however. Crime statistics are influenced by numerous socioeconomic factors, and while on-screen violence doesn’t provably lead to violent crime, plenty of violent crimes are inspired by personal biases like sexism, racism, and transphobia. And at the moment, transphobic hate crimes are on the rise.

Chappelle specializes in observational comedy about society and politics. His work is meant to have a real-world impact. And for several years now, he’s been repeatedly called out for spreading transphobic, homophobic, and misogynist ideas in his Netflix stand-up specials. The most prominent criticisms of The Closer came from trans women connected to Netflix (Dear White People showrunner Jaclyn Moore and Netflix software developer Terra Field), drawing direct connections between Chappelle’s transphobic humor and the bigotry and violence that trans people experience in real life. It seems disingenuous for Ted Sarandos to say there’s no “real-world” harm in giving Chappelle a platform.

Sarandos’ response also seems disingenuous in the context of Netflix’s push for more diverse and inclusive content. Earlier this year Netflix pledged to spend $100 million on promoting underrepresented talent, with Sarandos saying it was Netflix’s duty to ask, “Whose voice is missing? Is this portrayal authentic? Who is excluded?” Meanwhile, Chappelle was paid $60 million for a three-special deal in 2016, and has since released three more specials at Netflix. This suggests that Netflix may have paid more for Chappelle’s stand-up specials than for its entire diversity initiative.

While The Closer itself was widely criticized, Sarandos’ response to the backlash is reportedly the main impetus for the staff protests.

First, Sarandos defended Chappelle on the grounds that his last special Sticks & Stones was the “most watched” comedy special on the platform, implying that his popularity outweighed the reasons behind the backlash. Then Sarandos suggested that Chappelle’s comments couldn’t have a “real-world” impact. And between these two statements, Netflix temporarily suspended a transgender employee who criticized Chappelle on Twitter. This exacerbated the sense that Netflix wasn’t listening to criticism and that employees would have to take further steps to make their voices heard.