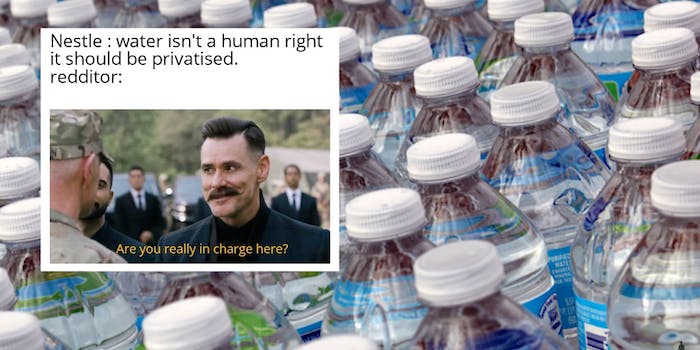 Redditors call for a Nestlé boycott through memes

Redditors are calling for a boycott of Nestlé, with many describing the food and drink conglomerate as “evil.” In true Reddit fashion, they’re doing it through memes.

Nestlé, previously best known for chocolate, has come under increased scrutiny regarding questionable practices surrounding its bottled water. The complaints include ruining the environment in Michigan and bottling California water without permits.

Nestlé also pays next to nothing to bottle good drinking water near Flint, Michigan, which is facing a water crisis. It bottled water in California during the droughts. Additionally, the company snatched up water in Toronto close to where indigenous community First Nations didn’t have enough to drink.

User PopuleuxMusicYT posted a viral meme on July 12 calling for a boycott of the company. The redditor highlighted other atrocious behaviors the company reportedly engaged in. Hours earlier, user TriggerOntheTrey posted the initial version of the meme, which contained the first half.

“Nestlé is a horrible company and has been taking water from a village in Pakistan and refusing to allow them to pipe it to their village,” the redditors claimed. “They only allowed them to get it if they buy through Nestle. They have also misinformed many mothers with their advertising of baby formula, causing many infant deaths.”

One particular iteration dug up an old quote from former Nestlé CEO Peter Brabeck-Letmathe. In a video, Brabeck-Letmathe said thinking of water as a human right was “extreme.”

“The one opinion, which I think is extreme, is represented by the NGOs, who bang on about declaring water a public right. That means that as a human being you should have a right to water. That’s an extreme solution,” he said in a video about food security in 2005.

Increasingly, redditors are bringing attention to outrageous injustices through humor and memes. With Nestlé having almost as many scandals as it has brands–which is over 2,000–it makes sense that the conglomerate is the current target.

Correction: TriggerOntheTrey posted the original version of the Nestle meme.