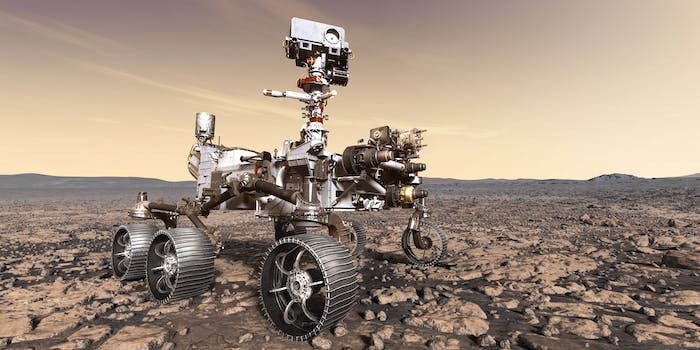 Everything you need to know about NASA’s Perseverance rover

NASA’s Perseverance rover is now on its way to Mars, blasting off from the Kennedy Space Center this morning. After a seven-month journey through space, the rover will land near the Martian equator, in a huge crater that once contained a lake. There, Perseverance will spend about two years (Earth years, that is) looking for signs of life on the Red Planet.

Perseverance is part of NASA’s longterm Mars exploration program, which has four key goals: searching for life on Mars, investigating the planet’s climate and geology, and preparing for human arrival. A crewed Mars mission is still a long way off, but several international space agencies have announced plans to make the attempt. NASA hopes to send a crewed spacecraft in the 2030s, although right now that’s kind of theoretical. The next big milestone will be sending more astronauts to the Moon in 2024; the first to land since Apollo 17 in 1972.

Currently there’s no solid evidence that life ever existed on Mars, but if it did, large bodies of water like the Jezero crater are a smart place to start looking. Once the rover lands, it can start searching for preserved microorganisms from when the crater was full, billions of years ago. So don’t hold your breath for Martian life that’s actually, well, alive. This video gives us an overview of where Perseverance is meant to land, and what it will do once it arrives:

The rover itself is similar to Curiosity, which landed on Mars in 2012, but it features some major upgrades including a detachable helicopter that can scout for new exploration sites. It’s also the first Martian lander to include microphones, so we’ll be finally able to hear what the planet’s surface sounds like.

Like all NASA missions, there’s a ton of cool material you can follow on social media as Perseverance continues its journey, beginning with the rover’s Twitter account. But perhaps our favorite detail is the fact that NASA offered “boarding passes” so people could send their names to Mars, meaning that (of course!) some K-pop stans put BTS’s names onboard. Never change, K-pop fandom!

With the trickiest part of the launch now complete, Perseverance has separated from the main rocket and sent its first successful signals back to Earth, with NASA continuing to livestream its progress on YouTube today.