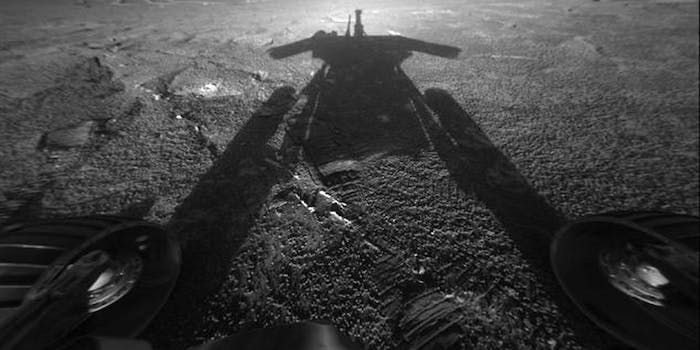 NASA launched two Mars rovers in 2003, named Spirit and Opportunity. Both rovers far exceeded their original mission durations of 90 Martian days. Spirit stopped communicating in 2010. Opportunity was in contact with NASA until last June, when a dust storm on Mars prevented the robot from using its solar power. But the space agency still held out hope for the long-surviving Opportunity.

NASA attempted to make contact with Opportunity one more time last night. Unfortunately, it was unsuccessful. On Wednesday, NASA officially ended the Opportunity rover mission. The announcement was made from NASA’s Jet Propulsion Laboratory in Pasadena, California, which manages the Mars rover missions.

“Spirit and Opportunity may be gone, but they leave us a legacy,” said JPL Director Michael Watkins during today’s press conference. “And that’s the legacy of a new paradigm for solar system exploration.”

The rovers “energized the public about the spirit of robotic Mars exploration” and inspired students to seek careers in STEM fields, Watkins added.

Although we still have one active rover on Mars—Curiosity, which landed on the planet in 2012—and another rover mission set to launch in 2020, the science and engineering communities were understandably heartbroken over the end of the Opportunity mission. On Twitter, people shared comics, illustrations, photos, and other tributes to the rover.

I'm heartbroken about #Opportunity. Let's just imagine that #Oppy has gone dark to set up its own Mars rover colony. (thanks @xkcdComic, this is my favorite) pic.twitter.com/KWRhoN4wO9

Hi it’s 6 am and idk why I’m crying over a robot? Farewell, #Oppy pic.twitter.com/aCKooMBwdd

Heartbreaking that it appears NASA's Opportunity rover has met its end. What an amazing mission – nearly 15 years active on Mars, more than 28 miles traveled, and some simply stunning images like this one. Farewell #Oppy pic.twitter.com/mk6x1mtMfa

Some people in the science community used the hashtag #ThankYouOppy while sharing their fond memories of the rover.

So as not to end this on a sad note, let me tell you about the time I kissed a rover.

(We should hope all missions last so long that questionable fashion choices at their start become downright terrible ones at their end)#ThankYouOppy pic.twitter.com/K0YknlJwrS

It has left its tracks. And though the winds may erase them, the memory and the science will live on forever.#Opportunity will always be with us.#ThankYouOppy @NASAJPL @MarsRovers pic.twitter.com/xGQC3jzEpm

In case you’re wondering how long Opportunity traveled over 15 years, NASA clocked it at 28.06 miles. That may not seem very far, but it’s the longest drive on a planet other than Earth. Goodbye, Opportunity! Maybe we’ll see you around if humans ever make it to Mars.