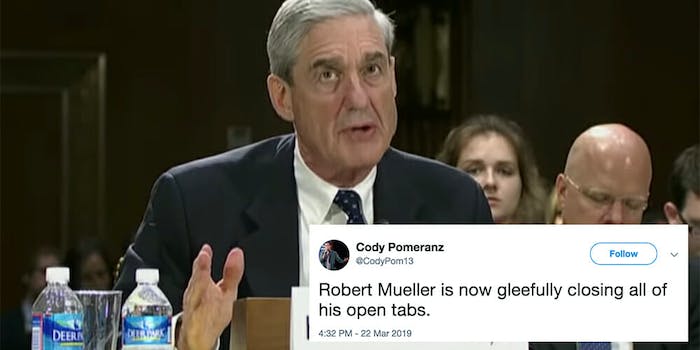 Mueller has submitted his report. Hopefully he attached the file.

For politicians and media outlets across the country, Thursday’s anticipation runs high. Finally, after two years of investigation, special counsel Robert Mueller is set to release his findings on any connections between President Donald Trump’s campaign and the Russians whose election hacking might have led to his victory. Republicans—including Trump himself—have called the efforts a hoax and a witch hunt. To Democrats, it’s an essential step to secure democracy. But to the internet, it’s all just more fodder for Mueller report memes.

For many Twitter users, Mueller’s decision to release the report on a Friday afternoon conjured flashbacks of frantic late-night typing and college papers submitted minutes before being due. When news of the report’s contents seemed to stall as the evening dragged on, some users chided that the special counsel had probably used some of their age-old tricks to secretly extend an assignment’s deadline.

Robert Mueller sweating in front of his laptop, staring at a Word doc containing only the words “The Mueller Report” and a blinking cursor

robert mueller renaming a huge .jpg "mueller_report.docx" and pretending its a corrupt file so he has the rest of the weekend to work on it

Robert Mueller is now gleefully closing all of his open tabs.

Other users speculated what the Mueller report might look like if it was released through means the public is more familiar with, like a Twitter thread or an email attachment. But it was writer Tony Posnanski who came up with the irrefutably worst method: “They should have dropped the Mueller Report like U2 dropped on every iPhone,” he tweeted Thursday.

"We Should Probably Talk About Donald Trump" by Robert Mueller

They should have dropped the Mueller Report like U2 dropped on every iPhone.

"So, I wrote a thing…" –Robert Mueller

The internet’s quickness to generate memes about the Mueller report findings feels particularly appropriate given the investigation’s close relationship with social media during its run. When court documents from the probe became public in December, references to a certain “Individual-1” who was obviously the command-in-chief ignited a series of Twitter memes based on the label.

Then there were Roger Stone’s Instagram snafus after being charged as part of the case. The president’s former political advisor earned himself a gag order for posting a Photoshopped image of the case’s judge next to crosshairs. He reportedly posted another image on Instagram this month that included the text “who framed Roger Stone?“

Given the fervor with which the Mueller case has captured national attention, it’s not likely these memes will stop anytime soon. Nor should they, with a format so ubiquitous it can serve clapbacks to J.K. Rowling, the Brett Kavanoaugh case, and Wuthering Heights in a single tweet.

J. K. Rowling confirms that Harry Potter would have wanted the underlying documents to the Mueller report made public as well.

what if Mueller's report is just

a book report on Wuthering Heights

We never thought to ask what he'd chosen to write his report ON. We just assumed. Oh no. pic.twitter.com/xRUFSPVN8B

Barr- Hell ya! It’s 4:59pm and I’m ready to go to Tobin’s house to hang with Squee and Kavana…

If and when it’s made public, who knows what memes will come out of the report’s contents.