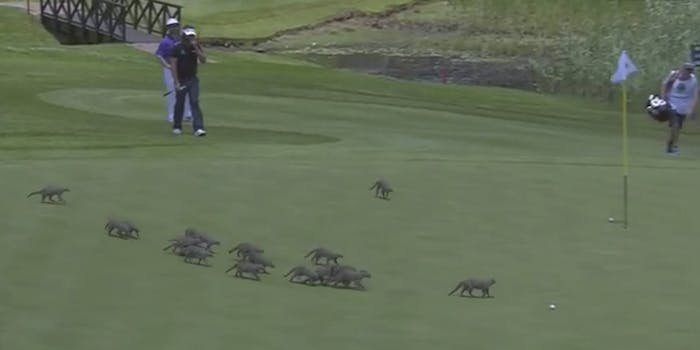 The world is still turning, folks. Though Donald Trump is now president-elect and the Cubs won the World Series, we’re all still here. A giant meteor has yet to make its presence known, demolish the Electoral College, and take us out of our misery. Instead, we have golf to distract us.

The masses have tuned into the Nedbank Golf Challenge, a European PGA event featuring the likes of international superstars and renegade up-and-comers. Oh, and the mongooses have stormed the field.

About 20 mongoose invade the green…

But they know not to interfere with the ball. 👏👏 https://t.co/EBdpVc803Z

You see, the majestic feliformia loosely related to cats has a deep love and appreciation of golf. These little guys weren’t trying to fuck up a game. They were just trying to meet their golfing idols and got a little excited. As you do.