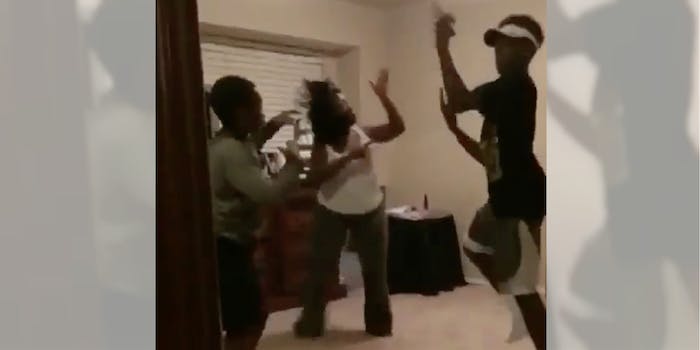 Nope, it's not 'pirate music.'

Apropos of nothing, a video of a mom and her kids dancing is getting dropped all over the Twitter timeline lately. It’s known lately as the Act My Age Vine meme, but there’s more to the meme origin story.

The clip shows a wholesome family moment of some well-choreographed moves.

Customer: “can you check the back”

Me and my other coworkers in the back: pic.twitter.com/KizBFz7F6U

Though many have identified it as the “pirate music” meme, the clip is actually set to “Act My Age” by One Direction.

can’t believe i’ve been looking for this vibe for ages putting “pirate music” and it was a fucking one direction song https://t.co/oZ6VzjBJRN

BuzzFeed News reports that the original video (now deleted from Vine but posted to YouTube) was filmed in 2014. The dancers are Aspect Za’Vier, his mother and professional choreographer Willona, and his brother Dexter.

Aspect Za’Vier, who’s now a music artist with more than 550,000 followers on Instagram, told BuzzFeed News that his mom choreographed the dance to “Drop” by Freco and Merlo. The clip was the first thing Za’Vier ever uploaded to Vine—and he’s thrilled that it’s still getting attention.

“I think it’s super cool because it’s something I just did for fun and everyone’s using it as a meme, and that’s crazy to me because it was years ago,” he told BuzzFeed News.