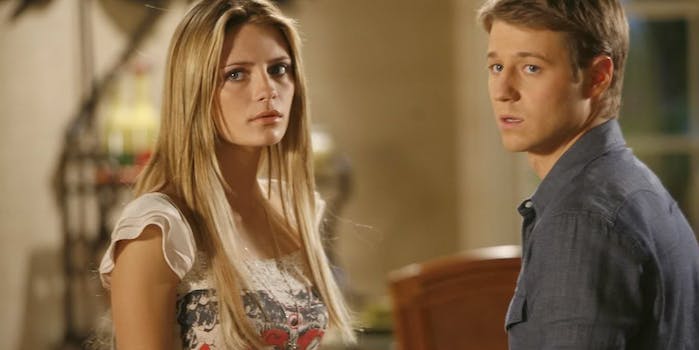 The complete history of the ‘Mmm Whatcha Say’ meme

This week someone posted a clip from a particularly dramatic moment on Game of Thrones with a song most commonly known as “Mmm Whatcha Say,” and the results were great (big spoilers ahead):

“Mmm Whatcha Say,” originally released in 2005 by Imogen Heap as “Hide and Seek,” is now the most easily recognizable audio signifier for an overwrought TV death scene—and it may be the most enduring legacy from The O.C.

The greatest American teen drama of the ’00s, The O.C. followed a group of wealthy, symmetrical Southern California friends and their undeniably sexy parents as they schemed, fell in love, and celebrated the fictional holiday of Christmukkah, all set to an eerily on-trend indie rock soundtrack. The show could be charming and witty, but it grew increasingly melodramatic after the first few seasons, culminating in a surprising season 4 shooting scene.

In the scene, the show’s female lead, Marissa Cooper, played by torpid-eyed patrician waif-gazelle named Mischa Barton, shoots a man as he tussles with her love interest, Ryan (Ben Mackenzie). The characters gaze at each other in horror as they contemplate the completely unnecessary and gratuitous violence that has just occurred.

The melodrama is accompanied by “Mmm Whatcha Say,” and it more or less distilled the overly serious tone the show took into a single scene of television.

The earnest, wretched scene and that damn song have stuck in our cultural consciousness even as its subject has faded into sad Vegas-bar star obscurity. It was quickly parodied by the Lonely Island guys for Saturday Night Live in a sketch called “Dear Sister.”

Know Your Meme traced the way the joke grew from there. Versions of the song-and-violence-clip combo started cropping up with more frequency. A shooting scene in Degrassi starring rapper Drake as a teen named Jimmy was one of the first versions to gain attention:

YouTube is now dotted with various TV death remixes, all set to the robot harmonies of Imogen Heap. Think of a famous television or film death, and it’s probably been Mmm Whatcha Say’d.

As a drama geared towards teenagers, it was only appropriate that Teen Wolf get the Mmm Whatcha Say treatment:

A fan of The Vampire Diaries chose to give a vampire’s conquest the Mmm Whatcha Say effect:

Some shows even got Mmm Whatcha Say’d when they weren’t even portraying death scenes, like Spongebob Squarepants:

People really took it and ran with it:

While it might be awhile until The O.C. gets resurrected as a cultural touchstone (just wait until this ’90s nostalgia bleeds into a yearning for the ’00s). But Mmm Whatcha Say has consistently remained the best way to inject an extra layer of contrived melancholia into a scene. And for that we have our friends in Newport Beach to thank.