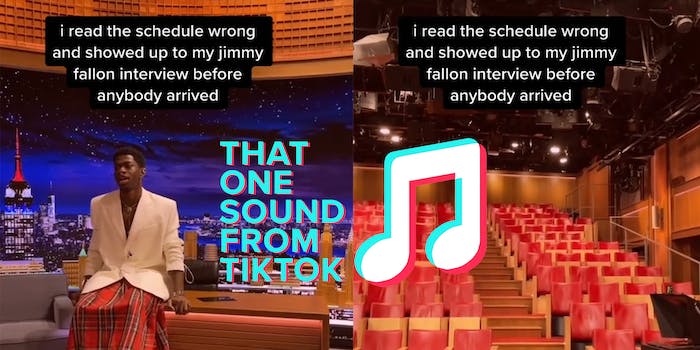 Summer is coming, and we’re in a period of transition. Many of us are vaxxed and starting to feel more comfortable resuming “normal” activities. But what about processing everything that happened to us over the last year? Well, that’s going to be tricker—and more personal.

Many people are ready to just go fucking nuts this summer, as the aftermath of Adrian’s Kickback showed this week. But it’s also completely fine if you aren’t ready to go nuts, and feel like canceling your plans or just vibing, because that’s what this week’s TikTok sound is for.

The sound includes a portion of Miguel’s 2010 slow jam “Sure Thing,” with someone is singing over the chorus. The most popular version comes from the gameplay account spinmovink, posted in early April, and the caption clarifies, “not me singing.”

The clip has more than 3 million views, and has since been used in more than 160,000 TikToks to convey moments of wistfulness, loss, or just vibing.

Some of the scenarios got a little dark.

Earlier this week, Lil Nas X used the sound to promote his Tonight Show appearance, joking that he got to set too early. The show also got in on the trend.

A TikTok compilation of the trend links to the original creator, isthatlai, who does NBA 2K gameplay. In early May, in response to someone asking for a “full cover,” she posted the longer version.

But the 16-year-old creator, who goes by Lailah, first posted the sound in February. She tells the Daily Dot she was “just playing 2K and I decided to sing over the sound or whatever and it just blew up.”

In the comments of the YouTube comp, people remark how much they love this particular version of the song, and use it as a default lo-fi “beats to relax/study to” track. There were already slowed-down remixes of the track, and another version of the Miguel song went around in a trend last summer.

On Thursday, Lailah duetted with the viral Lil Nas X clip, which now has more than 14 million views, writing: “If only people knew it was me singing this.”

This is a common occurrence on TikTok: The original source of a sound or trend or dance is obscured after it goes viral elsewhere. Lailah says people are giving her credit, though others—in the comments of the TikTok—predictably want “proof.”

It doesn’t appear Miguel has addressed the trend or the cover yet.