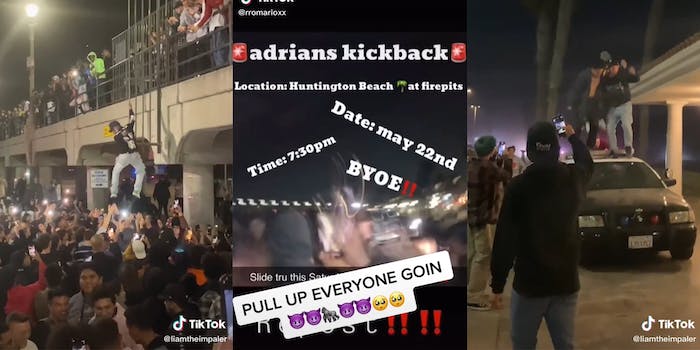 How did Adrian’s Kickback get so out of control? TikTok’s FYP helped

TikTok advertised a teen's birthday party to millions of users.

Were you at Adrian’s Kickback? At this point, anyone on TikTok could have been.

It’s not often TikTok is dominated by one event, but that happened last week, when buzz about a May 22 birthday party in Huntington Beach titled “Adrian’s Kickback” turned into massive street party that required police presence.

The Adrian’s Kickback hashtag now has more than 300 million views on TikTok, and under the tag are numerous videos from the event, including people running away from fireworks and an alleged appearance from Lil Uzi Vert.

People posted videos claiming they’d traveled hours by car to get to Adrian’s Kickback, or flew in for it.

Jokes about what Adrian’s Kickback would look like became a meme on Twitter, and some people referenced the 2012 film Project X, in which three high school friends throw a birthday party that slowly gets out of control, though big TikTokers threw those kinds of parties during the pandemic.

People also referenced Rubí’s Quinceañera, a 2016 event that was attended by thousands after the Facebook invite was accidentally set to public.

The New York Times‘ Taylor Lorenz interviewed 17-year-old organizer Adrian Lopez, whose TikTok account is now private. He said friend Yahir Fernandez originally posted about the party on Snapchat early last week, then promoted it on TikTok, where it initially got little engagement.

But videos about it started showing up on TikTok’s influential For You page, then it was amplified by bigger TikTokers like Noah Beck, even though the party was only supposed to be for Lopez’s high school. “Who’s Adrian?” became “Who’s going?”

Multiple videos from Saturday night show massive crowds clogging the streets in Huntington Beach and people climbing on cars and lifeguard stands. One TikToker claimed police fired paintballs at the crowd. There were also reportedly partygoers there on Friday night, confused about the date.

Lopez told the New York Times he “got scared” about the number of people coming in for the event, so he moved the party to an undisclosed space in Los Angeles and sold tickets. That party was quickly shut down. Those not in the loop or without tickets showed up in Huntington Beach.

According to BuzzFeed, Huntington Beach police instituted an emergency curfew that night and arrested 121 adults and 28 minors.

This TikTok from noahyangcomedy sort of sums up the absurdity of the situation, but also highlights how the For You page algorithmically built the hype for Adrian’s Kickback over the course of a few days. There were reports that TikTok removed some videos that documented the kickback. We’ve reached out for comment.

Lopez issued a statement via a recently acquired manager, saying he didn’t “start or encourage any illegal activities,” and that he made no money from the event. He told the Times his parents didn’t know about the party yet, but they likely do now.