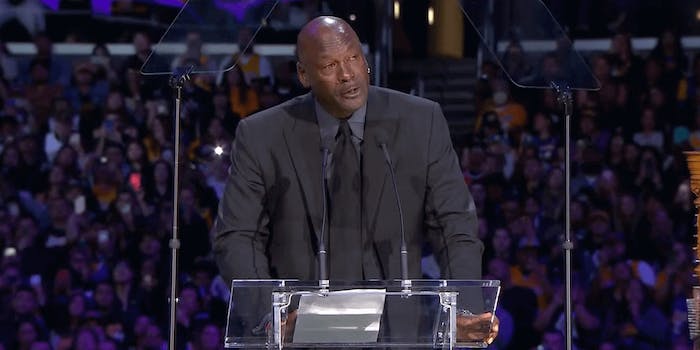 Jordan made some room for laughter in a room full of tears.

The “Crying Jordan” meme is undoubtedly one of the most widely known of all sports memes. If it’s flame had died down at all in the past few years, the man himself relit it at today’s memorial for fellow basketball legend, the late Kobe Brant.

The memorial was filled with both heartwrenching and uplifting moments. The date, Feb. 24, was chosen to represent Bryant’s jersey number (number 24) and that of his daughter Gianna (number 2). They were among the nine people who died in a helicopter crash on Jan. 26.

But amongst the many tears, there was room for laughter. Such as when Shaquille O’Neal told a story about trying to convince Kobe to pass more.

Or when WNBA star Diana Taurasi has some fun at LeBron James‘ expense. “I mean who has a turnaround fadeaway jumper at 11?” she said, speaking of Gianna. “LeBron barely got it today.”

But no one got a bigger laugh than Michael Jordan. Jordan and Bryant are often spoken of as rivals for the greatest player of all time, a fact Jordan acknowledged in his speech. He also expressed his great love for Byrant, referring to him repeatedly as a “little brother.” Jordan couldn’t help but cry as he talked about his friend and bemoaned having to look at a new meme. “I’ll have to look at another crying meme for the next…” Jordan said before trailing off as the crowd exploded in cheers and laughter. After composing himself a bit, Jordan continued. “I told my wife I wasn’t gonna do this, cause I didn’t want to see that for the next three or four years, but that is what Kobe Bryant does to me!”

The emotional evening included speeches from Vanessa Bryant and several other basketball icons and celebrities. It also included performances from Beyoncé and Alicia Keys, as well as selections from Bryant’s Oscar award-winning animated short Dear Basketball.