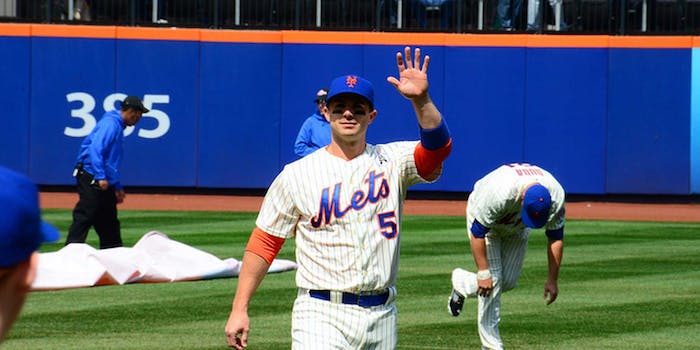 The New York Mets are hosting this year's All-Star Game, and they would really like it if David Wright were the starting third baseman.

The New York Mets are hosting this year’s Major League Baseball All-Star Game, and they would really like it if David Wright were the starting third baseman for the National League.

They want that to happen so badly that their marketing department has reached out to an unlikely ally: cougars. You know, older women who want to meet younger men.

Two weeks ago, Cougar Life—a dating site for, you guessed it, professional ladies on the prowl for young studs—published the results of a poll that named the Wright as “baseball’s hottest cub.”

With this information at hand, a member of the Mets public relations department reached out to site administrators last Friday in hopes that they would persuade its female members to vote for Wright, who finds himself in second place behind the San Francisco Giants’ Pablo Sandoval.

The following is the initial email sent out by the anonymous Mets employee, provided to Deadspin by a tipster:

We are trying to help push David Wright into the starting line-up for the 2013 MLB All-Star Game at Citi Field (his home stadium). He currently trails in the voting by 100,000 votes, even though he won win your vote as “MLB’s Hottest Cub”. We were wondering if you would be able to blog/post a story asking your users (who apparently admire David and would love seeing him play in the All-Star Game) to go to the below link to vote David and #VoteWrightNow as he needs their help. Voting online ends July 3rd and updates come out once a week, so the more support/posts about David the better. We would be able to share weekly updates if you would like to help push ‘your cub’ into the game and ask your members to #VoteWrightNow @ mets.com.”

The idea went over well with Cougar Life‘s marketing department, who quickly responded by saying that they would plan out a strategy to help out “Mr. ‘Right’.”

At that point, things appeared to be progressing smoothly. Cougar Life would send an email blast to its more than 40,000 members in the New York metropolitan area. The promotional effort would also extend to Facebook and Twitter posts. In return for the favor, the Mets would provide game tickets and a chance for Cougar Life members to meet the third baseman.

But the deal started heading into foul territory when the dating site’s representatives asked if they could put out a joint press release announcing the arrangement. At this point, the Mets PR staffer began to backpedal, admitting that s/he had not run the idea up the chain of command.

On Tuesday morning, the baseball club nixed the deal via email, citing that it would not reflect positively on the organization or on Wright.

“We received some pushback as we don’t feel a partnership working together would be the image that our team and David—especially since he recently got engaged—would like to portray,” the final correspondence read.

Ah, well. Looks like David Wright will have to settle to once again sub in for Sandoval during the game.