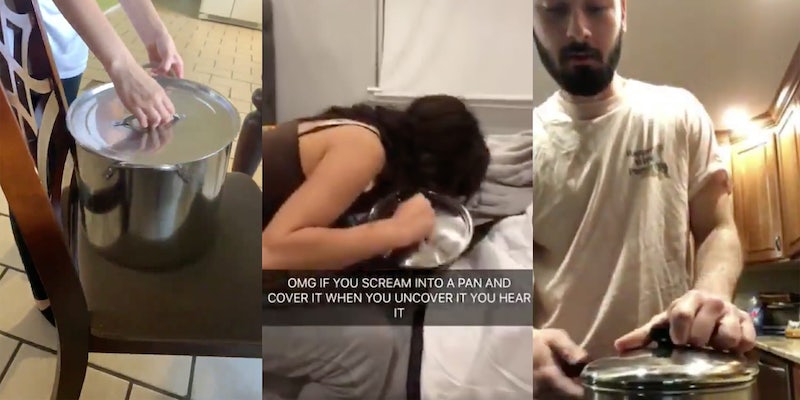 If you scream into a pot and quickly close its lid, does your scream get locked in until you remove the lid and unleash it to the world? The answer is no, but that hasn’t stopped a bunch of people on Twitter from trying it.

A Snapchat video that went viral on Twitter this week kicked off the trend. It shows a young woman leaning her face into a cooking pot, speedily covering the pot with a lid, and then uncovering it a moment later.

“OMG IF YOU SCREAM INTO A PAN AND COVER IT WHEN YOU UNCOVER IT YOU HEAR IT,” the caption says.

Indeed, a screen can be heard as the pot is uncovered—but whether it’s coming from the pot itself or off camera isn’t so clear (unless you have a basic understanding of how sound works).

“She actually screamed with her mouth closed and that’s the sound you hear when she opens the lid,” Corona said, adding that she got the idea from The Suite Life of Zack and Cody.

Interestingly, Corona posted his video back in January 2018. For some reason, it didn’t take off until this week, when it racked up more than 128,000 views—and lots of imitations.

Even someone’s pet bird tried it out.

Even though Corona says the sudden attention to his video has been very “random,” he’s pretty amused by it, as are his girlfriend and her sister.

“I think the whole situation is funny and it’s funny seeing people trying to attempt yelling in a pot, to hear back the scream,” Corona said.