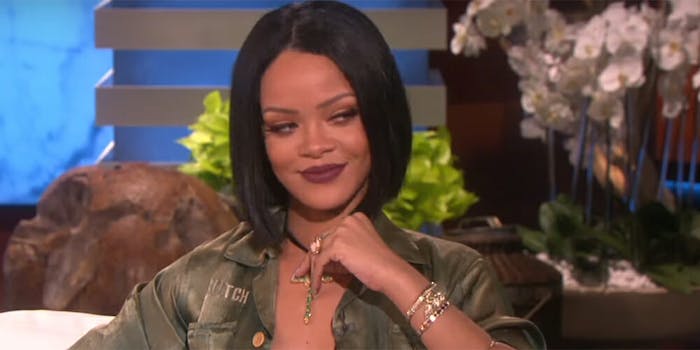 The Met Gala red carpet is one of the most-anticipated celebrity fashion moments of the year, but it’s amazing anyone bothers pulling a look when they know Rihanna is coming.

The singer and style icon didn’t fail to impress in 2018 with a pope-inspired dress designed by Maison Margiela Artisanal. The diamond-studded corset and bishop’s hat were stunning and apt for this year’s theme: Catholicism’s influence on fashion.

People on Twitter were happy to declare Rihanna the winner of the Met Gala red carpet—and worthy of her own religious movement.

WELCOME TO THE CHURCH OF RIHANNA. COME. SHE SHALL BAPTIZE YOU IN BODY LAVA AND SIN. pic.twitter.com/xIvBunLnhO

People also chided other celebrities for failing to adhere to the red carpet theme as successfully as Rihanna and Black Panther star Chadwick Boseman, who wore an ivory suit and cape decked out with gold crosses.

Apparently, Rihanna and Chadwick were the only two students who followed directions and did the assigned reading for the Met Gala. pic.twitter.com/pvhNRihhTr

Singers SZA and Solange, who both donned halos, were praised as well.

Notably, several celebrities including Chrissy Teigen and Beyoncé, were absent from the Met Gala. Or were they?