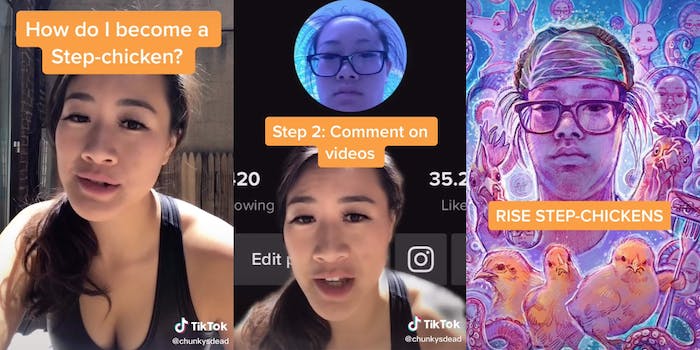 TikTok ‘cult’ wars started with a woman in a chicken suit

TikTok is a battleground—and Mother Hen is winning the war.

TikTok’s comment sections have become a battleground, and Mother Hen is winning the war.

TikTokers are increasingly turning their followings into so-called “cults.” According to Forbes, it’s all thanks to Melissa Ong, a 27-year-old comedian who posts videos about drug trips and her relationship with her baby hairs.

Ong’s cult, called the Stepchickens, can be distinguished from her 1.8 million followers by their profile pictures, which match hers. Stepchickens also refer to Ong as “Mother Hen” and heed her demands for tasks like commenting on other people’s videos.

Though her cult only recently formed, Ong’s YouTube video explains that the foundations for the Stepchickens began in May 2018 after she sent her current profile picture to a friend.

“Shortly after, she turned that photo into a mug to troll me,” Ong said in the video. “I ended up making a TikTok about it and everyone was really stoked about the picture.”

In October 2019, Ong bought a chicken costume for a Halloween party. After the costume didn’t get the appreciation she thought it deserved, she downloaded TikTok and began making videos in the costume. But most of them flopped.

A series of TikToks led to the eventual creation of the cult. In one video, Ong brings back the chicken costume and @curlytop_v comments, “Stepchicken what are you doing.”

Ong said she realized her power when she received 30,000 comments on a video in 24 hours after asking her followers to comment “e.” She then asked her followers to start commenting on other people’s videos.

Finally, Ong posted a TikTok asking her followers to suggest names for their cult. They chose Stepchickens and began changing their profile pictures to the original photo from May 2018.

Now, other TikTokers are creating cults of their own—and the fandoms are battling in comment sections. TikTok user @AdrianxOrtiz, for example, leads “the weenies.”

“TikTok culture is about to change. If you go to the comments section, you’ll see everyone’s faces on there from different cults,” @AdrianxOrtiz said in a YouTube video titled “CULTS ARE TAKING OVER TIKTOK.”

The focus, @AdrainxOrtiz said, isn’t to promote negativity but simply to see whose cult is better.

According to Forbes, these tactics are a way to increase content creators’ followings, secure sponsored deals, and build a community within TikTok.

Ong, whose following has doubled in less than a month, has also created an app called “Stepchickens” for her followers to congregate and to “glorify Mother Hen.” As of publication, the app was No. 8 in social networking after only a week.

Ong clarified in the comments section of her video that she will use OnlyFans for more chicken suit videos—not NSFW content.