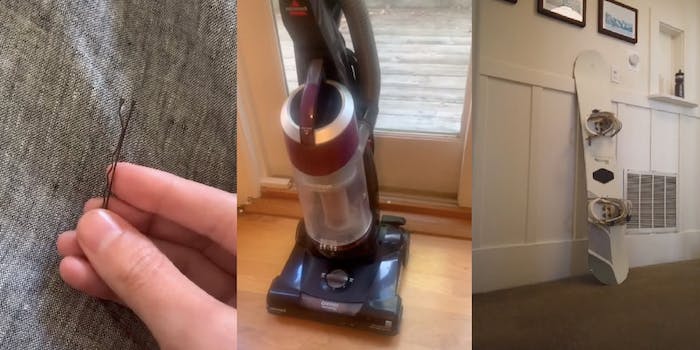 The TikTok user thinks she'll get a house in about 30 trades.

One girl is using TikTok to document her journey trading a bobby pin to a house, and her quest has piqued the interest of millions who are tuning into her channel.

Demi Skipper, who goes by @TradeMeProject on TikTok, uploaded a brief explanation of her mission to go from hair-clip owner to homeowner. In the video, she explains that she got the idea from Canadian blogger Kyle MacDonald who back in 2006 successfully bartered his way into a two-story farmhouse, starting with only a red paperclip. The blogger had started trading just a year before that.

“With all the bad news happening right now, it seemed like the perfect time to do something a little bit wild,” Skipper told the Daily Dot. “Two others have done this in the past that have inspired me, Kyle MacDonald in 2005 and Logan Paluzzi of @youngschnoz.”

In one of her first videos, the TikTokker also explains that she has already made several trades, upgrading from a bobby pin, to earrings, to some “pretty nice” margarita glasses, to a vacuum cleaner, and finally to a snowboard.

“Throw me a follow and watch me trade my way all the way to a house,” @trademeproject ends the short video.

So far, millions of users have liked her videos, and thousands have left comments. Skipper is surprised that so many have taken interest in her project.

“I was extremely surprised,” she said. “Within 24 hours I gained over a million followers and got thousands of messages supporting me on my journey to trade the bobby pin for a house. At one point I was gaining over 1,000 followers a minute.”

Whether or not the barterer accomplishes her lofty goal, @trademeproject now has over one million users following her on the platform, even though she has only uploaded four videos, which means she has already won by internet standards.

As for how many trades she thinks it will take for her to trade for a house?

“Right now I’m at four trades and have a snowboard, so I’m hoping that within 30 I can get the house,” she said.