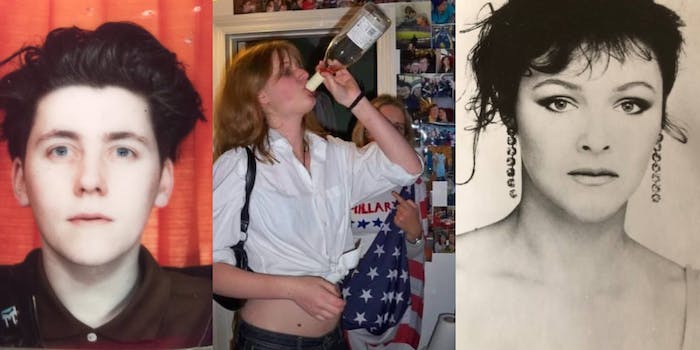 Hot on the heels of people posting their old senior pictures (an action the Better Business Bureau said was a bad idea) people on Twitter have started posting pictures of themselves at age 20.

20 is an interesting age. It’s a time when a lot of people are first really getting out on their own. They’ve been out of their parent’s house just long enough to start forming a separate identity, but not quite long enough to really know what they’re doing. It’s the age of first jobs, crazy decisions, and crazier haircuts.

Naturally there were a lot of shots of people drinking and partying.

While other people were busy protecting us from dragons and evil wizards.

A few people were probably excited to pull out some old pictures where the looked glamorous and cool.

But not everything was fun and games. Take, for instance, Caleb Cluff’s tale of being nearly cut in half one year out from being a teenager. (click through for the full story)

Ruby Tandoh, who was runner up on series four of The Great British Bakeoff, used the opportunity to let the world know how she felt about the show now.

Some people have decided that their chosen look at 20 was something they’d rather people not see again.

Justin Halpern, best known as the author of Sh*t My Dad Says, used the occasion to do a bit of light trolling. Apparently he just googled “shirtless hot dudes” and started posting.

Your early 20s are a natural time to feel nostalgic about. Nothing makes better memories than bad decisions. That having been said, a lot of people mentioned how much happier they are now then they were back then. The key, as always, is to try your best to enjoy where, and who, you are now.