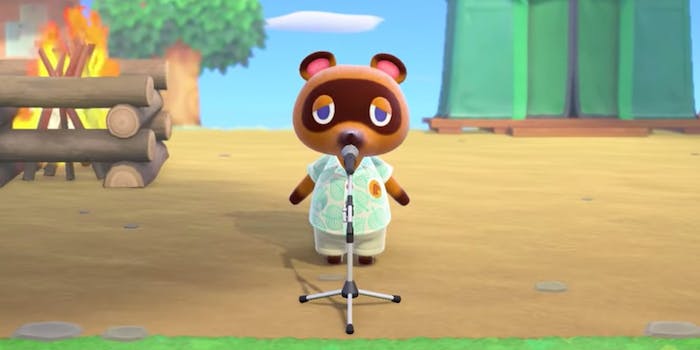 'To defeat Tom Nook is to defeat capitalism.'

Folks are discovering this fact the hard way, as more people adhere to social distancing guidelines. In an attempt to keep the tedium at bay, many people are working their way through Animal Crossing‘s recently released title, New Horizons. The adorable little Nintendo game has been all the rage since it came out in late March and is a wellspring for new memes.

This time, the memes aren’t all centered around gameplay. Instead, the hyper-specific memes are all oriented around town store operator Tom Nook. The new trend appeared to start with a late-night email from a college professor. “I hope you’re all doing well and that you’ve all defeated(?) Tom Nook (?) in Animal Crossing by now (I’ve never played Animal Crossing),” a line from the email reads.

In no time, the message was all over Twitter. People couldn’t help but giggle at the professor’s charming attempts at relatability. For anyone who, like the professor, has limited knowledge of Animal Crossing, Tom Nook has been a staple of the series for years. The little store owner has been the butt of many jokes over the last month, but none have reached the level of the “defeat Tom Nook” trend. And just in case you were still confused, no, it is not possible to defeat Tom Nook. The only things capable of being conquered in the Animal Crossing world are fish, bugs, and maybe boredom.

That didn’t stop the memes from flooding in.

“Petition to include Tom Nook in the next Super Smash Brothers,” one person joked.

While most people were joking about the professor’s word choice, others were imagining in-depth combat scenarios. “Did you guys defeat Tom Nook already,” one user jokingly asked. “I was trying to, but his second phase in which he becomes a giant satanic demon is giving me trouble.”

A few loyal players even took Tom Nook’s side. Their attempts to defend the bell-hoarding little raccoon were quickly overpowered by proof that he is, in fact, a greedy crook that deserves defeat. “This man charged me for a prize I won,” one person wrote. “How you gone make me for something that should be free? Eat the rich.”

There were even those who tried to imagine a scenario in which players really could defeat Tom Nook. There may not be any battles in Animal Crossing, but isn’t paying back your debt a battle in its own right? “I mean, technically you CAN,” one player wrote. “There’s very little debts in this game. Only five (although they are the biggest in the franchise). If you count each debt as a battle, then finishing the final battle would be defeating Tom Nook, right?”