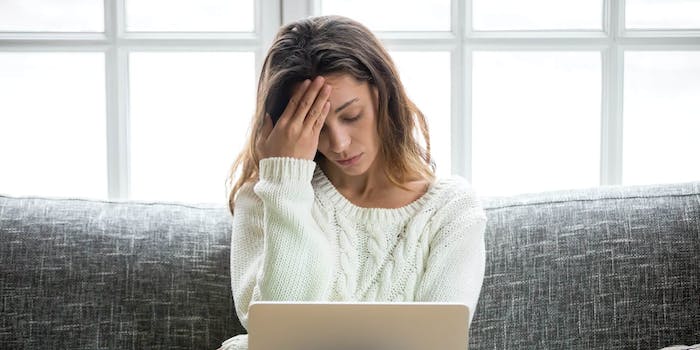 There’s now a slang term for getting dumped over Zoom

On the plus side, it's better than getting ghosted?

For better or worse, technology has irrevocably changed the modern dating landscape over the course of the past decade or so. Now, as singles and burgeoning couples around the globe are hunkered down in quarantine due to the coronavirus pandemic, many have now become completely reliant on technology as a means of dating. And while this equates to “FaceTime and chill” for many thirsty singles—unfortunately, others are inevitably getting dumped via FaceTime and Zoom. Or, “zumping,” as the phenomenon is now being coined.

“Zumping,” though it’s not difficult to surmise, is a mashup of the words “Zoom” and “dumping,” which occurs when a relationship is terminated over a video conferencing app. Other tenses of the word would ostensibly be “zump” or “zumped,” and so on.

The first known instance of the word was on April 9, when BuzzFeed freelance writer Julia Moser revealed that she had been dumped over Zoom. In response, Twitter user @wangjexi helpfully added: “Zumped.”

On the bright side, Moser was able to channel her heartache into zumping content, when she published the BuzzFeed article, “Getting Dumped During A Pandemic” a few days later, after she had some wine. “The internet connection wasn’t great, so we kept freezing,” she quipped in the lede. “‘We’re breaking up,’ I said—and we were!”

To be completely fair, Moser does note near the end of her piece that, especially in this day and age, her beau (who had initially thought he was ready to date again after ending a seven-year relationship the previous year) at least had the stones to do it to her face—or, to her “face,” as it would be.

“He didn’t ghost me, or gaslight me and tell me everything was fine when I could feel him pulling away, or drag this out for months and months with no end in sight until we were both just tired and dead inside,” she wrote, of her zumping. “He was honest and forthright, it was an incredibly decent thing for him to do, and I am miserable. There is no easy way around it.”

At any rate, since Moser’s original tweet blew up (gaining over 63,000 likes in less than a week), others began sharing their own stories of zumping woes or kind messages of solidarity.

At least one person thought “zumping sounded like … something else?

Someone even found a way to incorporate zumping into that new Gossip Girl anagram meme:

With this quarantine potentially stretching out into the early months of summer, sadly, Moser won’t be the last to get zumped—nor will this be the last we hear about zumping.