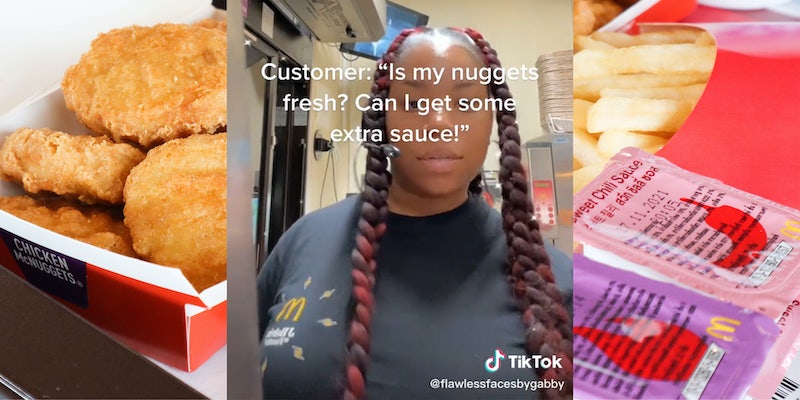 'Asking if the food fresh in a fast food place is wild.'

A McDonald’s worker put customers who ask for things like fresh nuggets and extra sauce on blast in a viral TikTok.

In the video, poster Gabby King (@flawlessfacesbygabby) shows herself in the McDonald’s drive-thru while wearing a shirt from the chain. She has on a headset and seems to be talking with a customer in the drive-thru. She claims via the text overlay that the customer asked: “Is my nuggets fresh? Can I get some extra sauce!”

The worker turns away from the window, looks into the camera visibly annoyed, and mutters something under her breath.

King’s video was viewed over 140,000 times. Some viewers argued that fast-food customers shouldn’t expect their order to always be made fresh given the time constraints when it comes to fast food.

“Asking if (the) food fresh in a fast food place is wild,” one commenter wrote.

“The issue is, you’re gonna get told the food is fresh regardless so why ask,” another commenter wrote.

On the flip side, others argued that asking for “fresh” food is not a big ask, with some apparent fast-food workers chiming in.

“Honestly it’s not rude or disrespectful you want to pay for fresh food too, right?” one commenter wrote. “You don’t want old food do you?”

“I ask for them fresh because i’m not paying for nothing that feel like it been just sitting,” another wrote.

“It literally never bothered me to make it fresh,” a third said.

Asking for fresh food at McDonald’s specifically is not uncommon, according to previous TikToks. Many workers have shared what they do when a customer asks for fresh fries or nuggets. Spoiler alert: None of the tactics involve serving customers actual fresh food.

The Daily Dot has reached out to Gabby King and McDonald’s via email regarding the video.