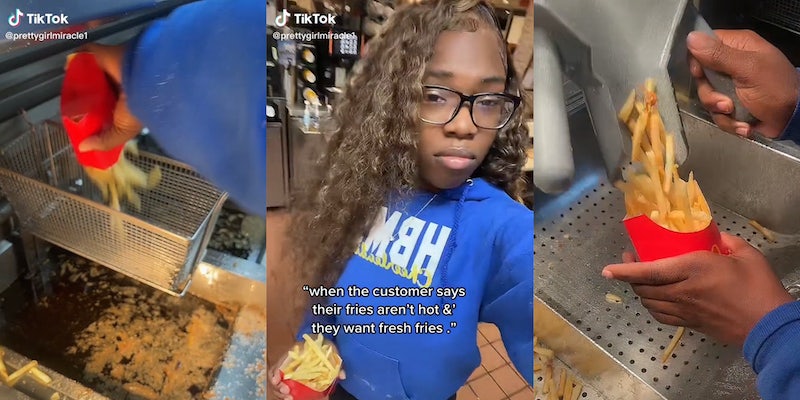 ‘When the customer says their fries aren’t hot’: McDonald’s worker has PSA for customers who ask for fresh fries

'I will never eat from McDonald's again.'

A McDonald’s worker once again shared what may happen to your fries if you ask for fresh ones.

TikTok user @prettygirlmiracle1 recorded a a person in the drive-thru, who is portraying a customer, handing an order of fries back to her with the text overlay saying: “When the customer says their fries aren’t hot &’ they want fresh fries.” She then proceeds to dump the same batch of fries back into the oil, reheating them.

The TikTok managed to accumulate over 8.6 million views since it was originally posted on July 21. The caption indicates that while the person in the drive-thru was a real customer, he agreed to make the TikTok with her for fun.

@prettygirlmiracle1 no cs they fries be just comin up . but tue customer was nice for participating#foryoupage #viralvideo #fypシ゚viral #mcdonalds ♬ Hotel – Lawsy

While many commenters expressed their disapproval of the practice, some didn’t seem to care, arguing, “idc if they reheated as long as they are warm.”

“I will never eat from McDonald’s again” one of the top comments says.

However, one user in the comments who appears to be a McDonald’s worker revealed they “be doing the same thing,” and numerous other TikTokers have made similar videos featuring the tactic over the past year.

A customer under @prettygirlmiracle1 thought they could outsmart these workers, claiming they are now going to ask for “no salt” on their fries in an effort to get new ones. But these workers appear one step ahead, as reheating the fries in oil when a customer asks for “no salt” is also a tactic McDonald’s workers have admitted to using in the past. They claim the hot oil “burns all the salt off.”

The Daily Dot has reached out to @prettygirlmiracle1 via TikTok comment.