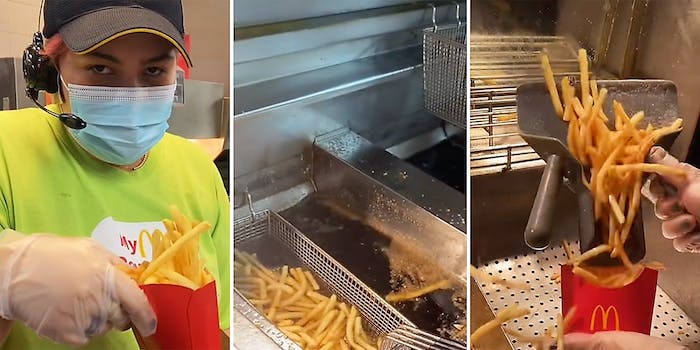 In a viral TikTok video, a McDonald’s worker reveals how they deal with customers asking for “fresh fries.” The latest in a series of fast-food workers’ videos on what happens behind the scenes of cheap eats, the video sparked controversy on minimum wage and sanitary practices in the comments.

“When customers complain and ask for fresh fries,” the onscreen text reads in the video.

The TikTok, shared July 23 by user @kiwipanda69 and nearing 1 million views, shows an employee dumping cold fries from a bag into the deep-frying basket and lowering it into the oil.

After reheating the fries, the worker places them back into a french fry box. This method of reheating had TikTok users in distress.

“This why I got trust issues,” one user commented.

The TikToker, however, insinuated that McDonald’s employees don’t actually stick cold fries back into the deep fryer. “All jokes luv,” the user commented.

However, many users utilized the video as an argument against a $15 minimum wage.

“Why can’t you just do your job. Don’t want to provide good customer service… take the cleaners job,” said another.

Others pointed out that the fries could be contaminated by the customers before being reheated.

“Unsanitary to take them back after a customer had already handled them,” one user said.

“If they already made it to the bag they should have been thrown away… if they were reheated right out of the holding tray that’s a different story,” another said.

Some users noted a tip for customers who actually want fresh fries. They suggested asking for unsalted fries, forcing employees to make a fresh batch, and adding the salt themselves afterward.

“Just order without salt! Then ask for salt,” one user said.

Despite the original poster’s insistence that the video is a joke, some seconded that McDonald’s workers do this.

“Why must [you] show this??? It’s suppose to be a secret,” one user commented.

“They aren’t lying either about this. This is what they literally do,” another said.