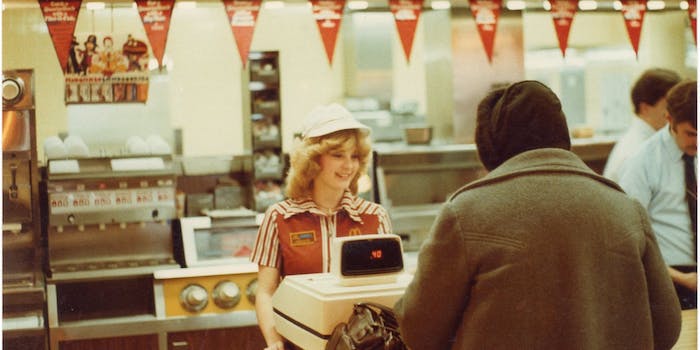 Busting the 4 biggest myths about McDonald’s

Last week, Grant Imahara (a former host of the Discovery Channel show Mythbusters) decided to lend his busting expertise to McDonald’s, releasing a series of videos as part of the fast food chain’s new media campaign. These videos and accompanying FAQs are supposedly meant to alleviate customers’ important, tough questions about the quality of their products, like: “Is McDonald’s beef real food?”

Gentle PR fluff that it is, the videos are more commercial than debunking, and another video did Imahara’s job better. A recent timelapse video from BuzzFeed revisited the myth of the aging McDonalds burger, finding out that their patties hold up better over 30 days than six competing chains. While others mold, the chain’s food looks exactly the same; this is a fact documentarian Morgan Spurlock testified to in a famous sequence from Super Size Me, in which the company’s fries refuse to mold.

With the food culture war raging on the Internet, I thought it was a good time to revising some of the biggest myths about the company. How did Imahara do in assessing McDonald’s? Let’s find out.

Former Mythbuster that he might be, Imahara’s first video, on whether the much misaligned “pink slime” is found in McDonald’s beef, is pretty misleading. Taking us through the Cargill production plant, Imahara definitively shows us that no such thing exists in their beef. He doesn’t mention that up until 2012, and for the past decade, it certainly did.

Officially known as Lean Finely Textured Beef (LFTB), the “slime” is the creation of a process originally designed by company Beef Products Inc. By spinning the leftover trimmings of other cuts of beef in a centrifuge and then filtering the meat through tubes that puffed ammonia gas onto it, BPI claimed they were able to produce cheap beef that was largely devoid of fat and harmful bacteria, a pressing concern as these trimmings came into more contact with fecal matter.

The USDA agreed, and as of 2001, LFTB and other similar meat products found themselves integrated in the the U.S. food supply, allowed to supplement a certain percentage of ground beef cuts, both lowering price and fat content. By the time an investigative report by ABC News hit the airwaves in 2012, LFTB was apparently found in 70 percent of the ground beef in America, including many popular fast food chains like McDonald’s and school cafeterias.

After the report and other efforts by food bloggers, reality TV chefs, and online petitions, the backlash was quick and sudden, with supermarkets and food chains quickly yanking LFTB from their product lines, several states either banning its use in lunch food or offering schools an opt-out option, and BPI losing millions in sales and laying off hundreds of its workers.

But as of yet, no disease outbreaks or health scares of any kind have been specifically traced to LFTB, and while ominous sounding, the ammonium hydroxide used to scrub the meat is regarded safe for use by the FDA (other companies like Cargill use citric acid instead) as an antimicrobial agent (it’s also commonly used as a bread leavener). There’s something to be said for aesthetics, but the idea that LFTB ever represented an unique danger to Americans is one spun out of perception, not reality, shamelessly played up by scary music chords and contextless media graphics.

We hear chemicals we can hardly pronounce and we’re frightened into action, pretty much missing the forest for the trees. Because while pink slime might sound  disgusting (more so than any other kind of raw meat?), it’s not less unhealthy than anything else we’re apt to eat at a Mickey D’s.

2) McDonald’s has been getting healthier.

Last year, a team of researchers published a study in the American Journal of Preventative Medicine in which they compared the fast food menus of eight popular chains, including McDonald’s, from the ‘90s to now. Using a 1-100 scale developed by the USDA, the Healthy Eating Index, the team looked at menu items from 1997-98 and those found in 2009-10. Relying on measurements of sodium, fat, and sugar, the team found that scores had only slightly budged upwards in the preceding 14 years, with an average increase of 3 points among all restaurants, up from 45 (according to the study, the average American’s diet is around 55). Other research has shown similar conclusions.

At this point, you might be wondering why these results weren’t published in the “Journal of No S**t, Sherlock,” but you’d be missing the point. As the authors note, chains like McDonald’s have been trying to tout their newfound commitment to healthier, more nutritious menu items for years, with newer products like the McWrap decked out in leafy greens. That all this time they’ve only barely modified the high levels of salt, fat, and sugars in their food might not be surprising, but it shouldn’t be brushed aside.

Over the past few years, there’s been a strong push for more upfront nutritional labeling and calorie counts of fast food items right at the counter, under the belief that if we’re confronted with just how heavy that Big Mac really is, we might shy away from it this one time. In 2010, steps to create a national law requiring chains with 20 or more outlets to label their items were begun, though as of last year, are still stalled. Many states have gone ahead with their own versions of calorie labeling regulations.

And it’s not necessarily a bad idea, as research has shown that we do dramatically underestimate the calories we eat during our local snack runs to the house of Ronald, even as we’re aware that the quarter pounder isn’t actually heart healthy. The problem is that the early results so far, which look at the effect of these new programs, aren’t exactly encouraging.

In 2008, right at the cusp of NYC‘s own enactment of calorie count laws, Carnegie Mellon researchers staked out a local McDonald’s before and after these changes and selectively handed out information on recommended caloric intake as well as survey forms for customers to voluntarily hand back. Of those who did, the researchers found that there was little change in consumption during the time period. There was even a small caloric increase among those who had been handed the recommendations the second go-around.

While some other studies have found a slight decrease in caloric intake, depending on which fast food chain or restaurant you’re looking at, the overall picture is grim on calorie counting having any significant impact on the takeout we take in. And that makes this heart-breaking if you’re the sort of person who cares about our worsening diets.

4) McDonalds isn’t (partly) to blame for our obesity.

While there’s definitely a solid case to be made that obesity isn’t solely responsible for increased rates of diabetes, heart disease, and a shorter lifespan among the population, the obese do overwhelmingly have a decreased physical quality of life and increased healthcare costs. More importantly, the rate of obesity is only increasing, including among our children. You can disagree about the degree to which obesity represents a growing health crisis, but not about its existence. (You can’t disagree about how much abuse and discrimination obese and overweight individuals, especially women, publicly receive from all corners of life, but I digress.)

And in reality, the game is rigged. Where there are more McDonalds and other fast food chains in a given area, there will be an increase in obesity.

Among low-income and racially disparate neighborhoods, where obesity disportionately occurs,  there are more McDonalds than elsewhere, and more conveniently located near schools where kids first begin to form the eating habits they’ll have for life. These neighborhoods also tend to have less access to high quality foods, resulting in so-called food deserts.

Tie in some stagnant wealth accumulation among these same populations (so they can’t leave for greener pastures), longer working hours but less pay to cook fresher, more healthy meals, and a marketing blitz of several billion dollars a year by fast food chains and you’re left with a powder keg of malnutrition waiting to go off. So influential are these circumstances that researchers have taken to coining them “obesogenic environments”—which, in my book, is the third-scariest word ending with “genic,” after carcinogenic and mutagenic.

That doesn’t mean Grimace is nefariously scheming in the McDungeon to make America’s kids fat, nor that abolishing the happy meal will bring us smaller waistlines and unclogged hearts. The story of obesity is a hopelessly convoluted one, with more than one culprit to blame, including our own human nature, but McDonald’s and its ilk has certainly shaped the way we eat our food over these past few decades. And any solutions to the problem of obesity will have to reckon with the Golden Arches if they want to be effective.

That topic might not make for a catchy viral video, but it’s the one Grant Imahara would be better off exploring.