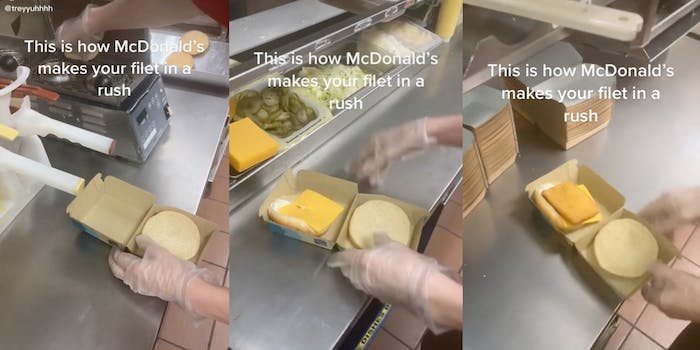 ‘This is how McDonald’s makes your filet in a rush’: Worker’s viral TikTok sparks debate about fish fillets

'Who tf orders a filet.'

TikTokers have never been shy about “exposing” the various fast-food places they’re employed at. And a new video seemingly poking fun at that trend shows how McDonald’s employees make fish fillets while “in a rush.”

The now-viral video, posted by user @treyyuhhhh, an alleged employee at the franchise, shows him making the sandwich. Text overlay on the screen reads: “This is how McDonald’s makes your fillet in a rush.”

The video starts with a gloved McDonald’s employee slapping two buns into a to-go burger container. They then add tartar sauce, a folded slice of American cheese, and the fillet before shutting the lid. The employee finishes creating the sandwich in under 20 seconds.

It’s not immediately clear how this method of preparing the sandwich varies from what would happen if an employee wasn’t rushing; but the TikToker clarified that his video was only a joke.

“Nobody was given this,” the video caption reads. “Who tf orders a filet.”

Nonetheless, most commenters laughed along with @treyyuhhhh’s joke. Others questioned whether it was time for them to attempt to try the chain’s Filet-O-Fish for the first time.

“ngl for some reason I’ve been thinking a lot lately about getting one. I’m 36 and have never had one before. I don’t know why I suddenly want one,” one said.

Others questioned “people who eat filet-o-fish at McDonald’s,” with one claiming said customers “can’t be trusted.”

However, some defended the fish fillets. “Them filets be bussin,” one said.

“I’m crying bc it’s my fav,” another proclaimed.

Responding to one of the top comments on his TikTok, @treyyuhhhh promised, “We ain’t like this. We have kitchen and service managers every shift.”

The Daily Dot has reached out to @treyyuhhhh via TikTok comment and McDonald’s via email.