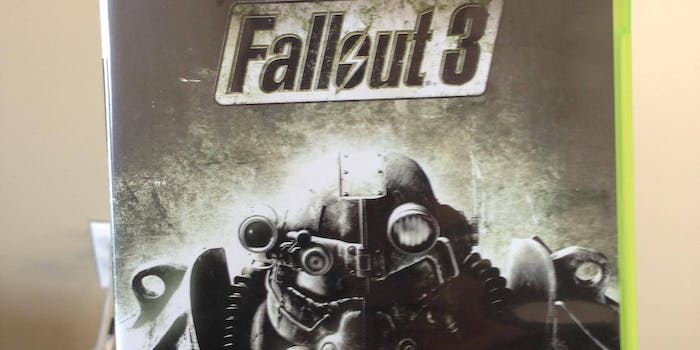 Where did this copy of Fallout 3 come from, why did Matthew Perry sign it, and why was it $5? The subreddit r/gaming is ON IT.

Five dollars can buy a lot of things. Certain Subway foot-long sandwiches. Top-shelf merchandise at the retail chain Five Below. Now you can add a copy of Fallout 3, autographed by Matthew Perry, to that list.

On Dec. 13, redditor rkalajian posted a thread to the subreddit r/gaming, asking the question “Bought this for $5 today. Anyone know who’s [sic] signature this is?” Accompanying the post was a photo of his copy of Fallout 3.

The question received over 4,000 upvotes. Almost instantly, redditors replied with the near-unanimous answer of “Matthew Perry.” As redditor TectonicImprov eloquently summarized it, paraphrasing the Lonely Island:

Reddit answered so fast it was scary. Everybody stared in awe when they screamed “MATTHEW PERRY!”

With the identity of the autograph revealed, the next question was obvious: Why was there a $5 copy of Fallout 3 signed by the Friends star? Perry’s involvement in the Fallout franchise didn’t begin until the following game in the series, Fallout: New Vegas, in which he voiced the character of Benny.

The r/gaming community did a little detective work and came up with a possible answer: the game was signed by Perry for charity during an April 24, 2009, appearance on The Ellen Degeneres Show.

As proof of this, redditor MilkSweat posted a link to the episode in question, which shows Perry autographing the game.

Redditors also deduced that Perry’s enthusiasm for the game was what led to his casting in Fallout: New Vegas.

rkalajian was elated at the game’s unique backstory and shared the progress of an email conversation he had with the woman who sold him the game.

“I actually sent her a message asking if she knew who signed it about the same time I posted here. Still nothing back from her. I’m going to have to send her the details. Wonder if she’s the one who won the auction, or if her or one of her kids got the game from someone else who did, etc…” he said.

Hours later, he posted an update:

I got a response!

Me: “Just curious if you know who the game is signed by?”

Her: “No…my husband bought on ebay a while back. He said he thinks it’s a famous athlete…maybe a hockey player?! But he does remember it was someone random…not affiliated with the actual video game in any way.”

So I sent her a message explaining everything that’s happened since I posted the pic here :) Still awaiting a response!

So redditors, if you have a copy of, for example, Grand Theft Auto IV that’s emblazoned with what could be the signature of Courteney Cox, take your case to r/gaming. They may be able to help you out. Or troll you by telling you it’s Matthew Perry again.