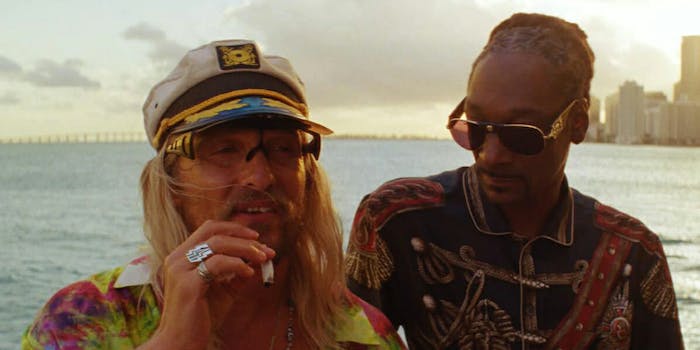 With The Beach Bum, director Harmony Korine has moved onto the hedonistic portion of his career. Previously, Korine had excelled in capturing the ugliness of the human experience and material deprivation through films like Gummo and Trash Humpers. Now, Korine is examining that same ugliness through the lens of excess and luxury.

The Beach Bum sees Matthew McConaughey transforming into the ultimate bohemian layabout, Moondog. The performance here is stellar. McConaughey’s inherent charisma is a perfect framing for the outlandish Moondog.“I’m a bottom-feeder, I gotta go low to get high,” says the washed-up poet who spends his days meandering around the seaside bars.

Similar to Moondog’s life, the first half of the film is somewhat directionless. Although it serves only to build the absurdist world that Moondog inhabits, the technical composition and humor merit this slow pace. In particular, the sequence of Moondog and Isla Fisher’s character, Minnie, on an escapade of love and debauchery is an outright feat of filmmaking. While these scenes may come off as all flash and no substance, initially, they serve as essential world-building to introduce the audience to Korine’s style of filmmaking.

Like hedonism, there seemingly isn’t anything wrong with Moondog’s life until there’s something very wrong with it. After the impetus of action, we see Moondog having to traverse that same absurd world in a very different position. From here, we see McConaughey navigating from vignettes starring actors Martin Lawrence, Zac Efron, Snoop Dogg, and even Jimmy Buffett as he attempts to return to his version of normalcy.

When the film divulges into more slapstick moments, one can be tempted to dismiss this movie as a purposely eccentric romp and nothing more. Yet glimmers of Moondog’s self-awareness and moments such as Jonah Hill’s character, a literary agent, telling Moondog that his favorite part of being rich is the ability to be outright awful to people refute this. Korine is aware of what an awful person Moondog is and choosing to portray him as this invincible figure who things always just seem to work out for proves subversive.

The Beach Bum has no cohesive theming or satisfying comeuppance for its despicable anti-hero and that’s deliciously true to life. Moondog is the same person he was at the beginning of the film when the credits roll. It’s exactly what Korine wanted it to be. It can be equally appreciated as just a psychedelic, drug-fueled wild ride or as a thesis refuting the very concept of the hero’s journey.