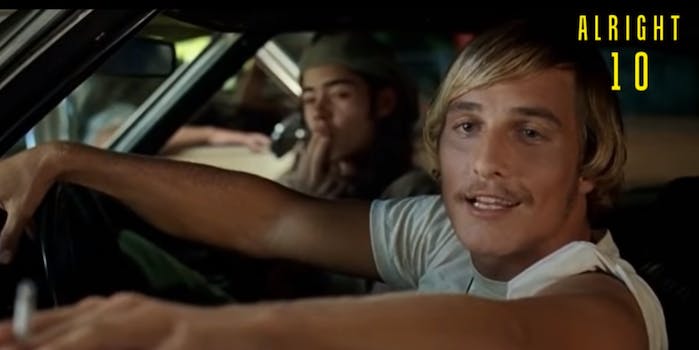 Video captures every ‘alright’ Matthew McConaughey has said on film

How many times has Matthew McConaughey said: “alright”? We first heard it in the 1993 film Dazed and Confused—one of the McConaughey’s first roles—and we continued to hear it over the actor’s long career. We’ll probably hear him say “alright” many more times in the future.

One YouTuber, Owenergy, uploaded an impressive compilation of every time McConaughey has said “alright” in a film, chronologically, from Dazed and Confused in 1993 to 2017’s The Dark Tower. Check it out:

Through clips from Mud, Magic Mike, Dallas Buyers Club, and even Failure to Launch, the count climbs higher and higher. By the end of the nearly 5-minute video, the count reaches 280 alrights.

It’s definitely not the first time someone has made a compilation video of McConaughey saying his signature line, but it’s impressive that someone took the time to parse through the actor’s entire filmography to make an up-to-date, comprehensive video.

Here’s another compilation of the actor saying “alright” during award shows and TV interviews:

During a 2014 Golden Globes interview, McConaughey said “alright, alright, alright” were the “first words [he] ever said on film.” Now people remember him for the line.

That deserves a place in a hall of fame somewhere, doesn’t it?