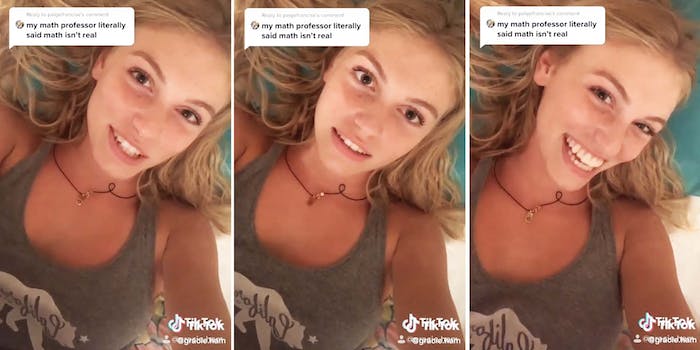 How many of us have sat through countless hours of algebra or calculus in high school, or even college, only to never use those skills ever again in life? It makes you wonder why, at some point, it was decided that advanced math should be part of every student curriculum. Or even, who came up with the concept of math in the first place?

These aren’t invalid questions, which is perhaps why a TikTok user recently went viral for asking them.

Gracie Cunningham, who goes by @gracie.ham on the platform, uploaded a video earlier this week asking the hard questions about tough equations.

“I was just doing my makeup for work and I just wanted to tell you guys about how I don’t think math is real,” Cunningham said in the video. “And I know that like, it’s real, because we all learn it in school or whatever, but who came up with this concept, and I know [you’re gonna be like] ‘Pythagoras.'”

“But how? How did he come up with this?” she continued. “He was living in the … I don’t know, whenever he was living, but it was not now when you can like, have technology and stuff, you know? Like, he didn’t even have plumbing, and he was like, ‘Let me worry about why y = mx + b.'”

Furthermore, she goes on to question what these ancient philosophers even needed math for—not to mention, what would lead anyone to come up with such a punishing concept of algebra in the first place?

Cunningham actually makes some salient points. But perhaps chalk it up to her VSCO aesthetic (she’s even wearing puka shell necklaces in a few of her videos) or valley girl speech patterns—because the video subsequently made its way to Twitter, where one user claimed it was “the dumbest video [they had] ever seen.”

However, in a stunning display of solidarity, others quickly piled on to defend Cunningham and praise her for asking philosophical questions and challenging a concept that we’ve all just resigned ourselves into accepting as the norm.

Among those ranks included many mathematicians, physicists, and other scholars, as you can see from some of the clapbacks, below.

In a followup video—which, this time, she took the liberty of posting to Twitter herself—Cunningham gave herself a “re-do” to further explain what she meant. “And I would like to be smart this time, ’cause I didn’t know that was gonna go viral,” she laughed.

“My first question is how did people know what they were looking for when they started theorizing about formulas—because I wouldn’t know what to look for if I’m making up math,” she explained. “Question number two, once the did find these formulas, how did they know that they were right? … Because, how?”

Questions three through seven were somewhat more flippant, but prove that at least she has a good sense of humor about the whole thing.

“Number three, why is everybody being really mean to me on Twitter?” she continued. “Number four, why did a physicist who’s followed by Barack Obama retweet me? Number five—is this number five? I can’t count? Number six, is anyone gonna post this on Twitter?”

“Number seven,” she added, in a final devastating blow. “Why are the only people disagreeing with me the ones who are dumb and the physicists and mathematicians are agreeing with me?”

And that, friends, is what we call a math mic drop. TikTok VSCO girl: 1; online haters: 0.