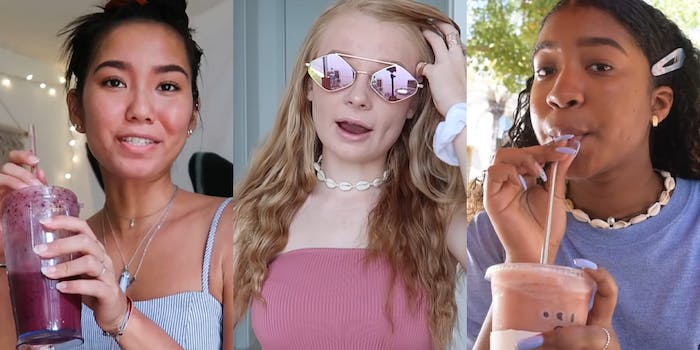 The VSCO Girl has always been here

The look has spread across social media, but you've probably seen it before.

What is a VSCO Girl, and why are you seeing them everywhere?

It’s the dead zone of Hot Girl Summer, but another label has dominated the feeds, confusing older millennials and Gen Xers who never thought they’d have to see scrunchies and puka shell necklaces again.

The name comes from the VSCO photo-editing app, which boasts more than 2 million paid subscribers, with 50 percent of those subscribers under the age of 25. Founded in 2011, VSCO (pronounced “Visco”) was built for photography enthusiasts and offers an array of filters and editing tools; it doesn’t have comments or likes. Julie Inouye, VP of communications for the company, tells the Daily Dot that a VSCO subscription is often a teen user’s “first purchase they’re making with their own money,” and adds that the like-free format takes some of the pressure off younger users to behave or look a certain way.

The “girl” part of it is a little harder to define. An aesthetic has emerged that identifies the “VSCO Girl”: armfuls of scrunchies, big T-shirts, Hydro Flasks, Starbucks cups, puka shell necklaces, Birkenstocks, Mario Badescu products (and, sometimes, a camera). The VSCO Girl has tendriled into YouTube, Twitter, Instagram, and TikTok, where you can find tutorials and parodies. But the VSCO Girl is also open to interpretation.

Know Your Meme traces the origins of the term to a January 2019 YouTube video from Greer Jones, though the aesthetic had been explored prior to that. A Google Trends search for the term “VSCO girl” shows a flatline until June 2019, when it spiked, and there’s a similar spike for the term “What is VSCO girl.”

According to Emma Marie DeLucio of the YouTube channel Emma and Ellie’s Family, the trend took off when more “famous” YouTube personalities like Emma Chamberlain and Hannah Meloche started making videos about it, and the aesthetic “has to be trendy and basic.” The word “basic,” which has developed a negative connotation, is being recontextualized within the meme.

YouTube is home to hundreds of recent videos about how to “transform” into a VSCO Girl or shop for the look, including one somewhat distressing video of an Urban Outfitters that’s stocked with a wall of scrunchies and Hydro Flasks. Of course, you also have to be able to afford this look.

On TikTok, you’ll find more parodies of the look. Two big memes, “Here’s the motherfucking tea” and “Save the turtles,” could be seen as representative of the VSCO Girl, and the “And I oop” meme has been co-opted. This TikTok from user koobydoobydoobydoo and has more than 12 million likes and I’m pretty sure I knew this girl in high school. In the ‘90s.

The recycling of VSCO Girl fashion

As mentioned on social media, if you’re of a certain age, you’ve already seen this look pretty much verbatim. I went to Catholic school with these girls in the 1990s. I might have been a VSCO Girl in my early teens: huge T-shirts (I remember being fond of one Coed Naked shirt), Birkenstocks, hemp necklaces, Grateful Dead stickers everywhere (I didn’t know better). Replace the Hydro Flask or Starbucks cup with a reusable 7-11 Big Gulp cup. Teens today know how to do their makeup much better, though.

But I do remember wearing that look because it was what other girls were wearing—and because I was self-conscious about my body. We all were.

The look is, honestly, the least interesting thing about the VSCO Girl. More interesting are the experiential offshoots, like the VSCO sleepover, which often involves sleeping on pool floats or trampolines and looks way more fun than sleepovers I attended, where underwear-freezing was often the highlight.

There are also VSCO-inspired room makeovers, and VSCO “dates.”

The VSCO Girl look could also be seen as an offshoot of the TikTok egirl or the Tumblr girl. Taylor Swift, a true Tumblr girl, has flirted with the VSCO look, and if this preview of her new collaboration with Stella McCartney is any indication, she might be creating her own.

i know there are no scrunchies but tbh this is a v. VSCO-girl look https://t.co/RfW7GZMDbV

While the discourse (Viscourse?) around the VSCO Girl has focused on the look, Inouye stresses that on the app, there are girls (and boys) who have their own aesthetic, and it doesn’t look like what’s parodied online. In a series of interviews for VSCO, creators spoke about finding their inspiration and identity, and using the platform to work through mental health or body issues. This context is missing from a lot of the VSCO girl “content.”

“A lot of times they’re posting for themselves, and not anybody else,” says Inouye. “Because there isn’t that pressure of seeing comments or having to look at how many likes you get or who’s following [them].”

VSCO user Lili Higgins, 19, tells the Daily Dot she wasn’t really familiar with VSCO girl trend until this week, but does see a “huge aesthetic difference between VSCO and apps like TikTok and YouTube because you can see more forms of feedback like comments, likes, etc.” VSCO’s format makes it more of a “safe place.” Higgins adds that the app “has completely changed my life. I found what I love to do through this app!”

After watching hours of VSCO Girl YouTube videos and TikToks, the line between genuine and performance started to blur; it seemed like a lot of people who could be VSCO Girls were parodying VSCO Girls. Have we reached a paradox? Or will we just see another version of this in five years? We’ll have to wait to find out.