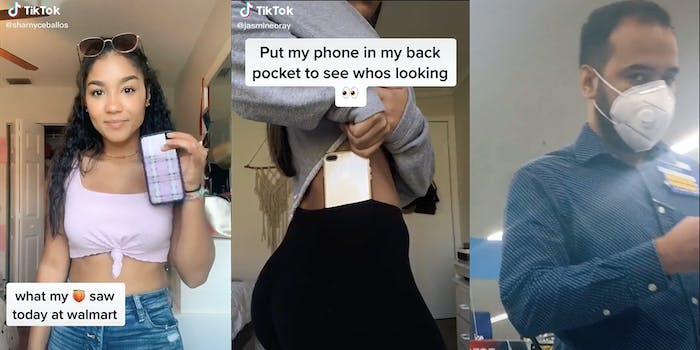 Catching creepers in the act!

A viral TikTok trend sees curious TikTokers using their phone cameras to capture what’s going on behind them. The trend, “Phone in Back Pocket,” typically entails a TikToker turning on their phone’s camera and placing it in their back pocket as they go about places like the grocery store or the mall to expose onlookers who may have stared at their butt.

Videos listed under the trends tag “#phoneinbackpocketchallenge” have been viewed upward of 23 million times on the platform.

The trend has yielded a wide range of unsolicited stares, with some users being shocked by the number of looks from behind that come their way. On one listed video, a TikToker wrote, “I expected some, but I didn’t expect it to be this much with only 10 minutes of footage.”

For others, testing the TikTok trend was less successful. In a video, which was posted by user @juana_cruises and has been viewed over 300,000 times, the poster can be heard saying, “Welp, nobody looked… not a single person. The only person that looked was my boyfriend, literally just my boyfriend.”

The TikTok trend has also spawned its own host of memes, where users will replace actual footage with clipped images or stills of celebrities like Harry Styles, Chris Evans, or even Mr. Moseby from The Suite Life of Zack & Cody as a comedic twist on the original style of video.

Many users have responded to the challenge by pointing out that unsolicited staring is disturbing in any circumstances.

Another user commented on the trend to suggest that a phone in a pocket may also be what draws in looks, saying, “I feel like everyone looks at a phone in someone’s back pocket, no? If you see it from a glance you just automatically look again.”