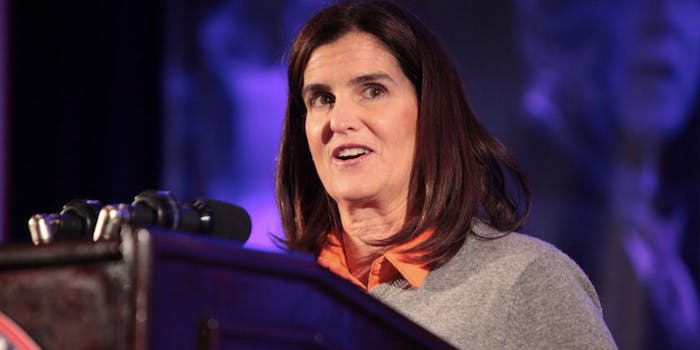 Keeping it in the family.

In a Tuesday night speech celebrating a swath of primary victories, presumptive Republican presidential nominee Donald Trump engaged in the obligatory bashing of Hillary Clinton, his likely rival in the general election.

Perplexingly, Trump claimed that she had only found success in life because of her gender while still being generally hated by women.

The woman standing behind Trump appeared to experience some painful inner reflection on that point.

Yes, that’s Mary Pat Christie, wife of New Jersey governor and Springsteen superfan Chris Christie, who himself once infamously appeared to be held against his will in the background of a Trump speech.

All around me are familiar faces… https://t.co/cAee90DJ88

What’s more, Christie continues to put on his hostage face whenever he appears with Trump. He’s clearly going for “stoic,” but in the middle of this 2016 election nightmare, it’s just not possible.

Has Trump kidnapped both Christies, letting them out of a top-secret bunker only to keep up appearances? What of their four innocent children? Is he ever gonna send a ransom letter or what?

Please pray for the safe return of the Christies.