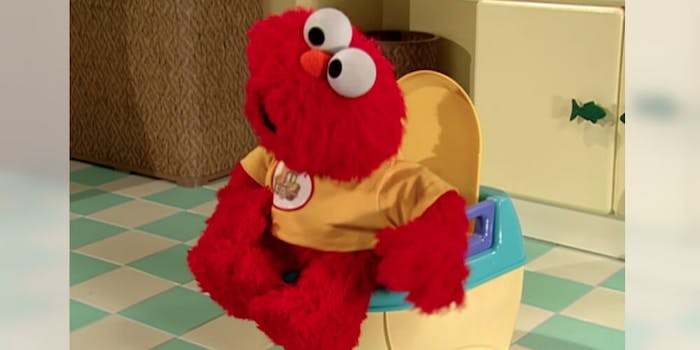 People flooded the workplace in question's page with memes.

A man is claiming he was fired after his boss saw a meme he posted on Facebook. The meme in question features Elmo on the toilet with the caption, “Boss makes a dollar, I make a dime. That’s why I poop on company time.”

Hidalgo’s boss, “Andy,” texted him, “We don’t make a dollar when [you’re] shitting all the time. Why don’t you stay home and do your shitting. I don’t like to play your bullshit games. Maybe [there’s] a company out there that would put up with your games [because] I won’t. Good luck!” When Hidalgo responded, confused, Andy told Hidalgo to look at his Facebook.

Hidalgo questioned, “Because I shared a funny meme…? On a Sunday? When I’m not at work?” Hidalgo’s boss responded, “You brought work into it on a Sunday.”

These are serious consequences for a seemingly harmless meme. Many commenters are even calling it “wrongful termination.”

According to Hidalgo’s Facebook page, he was employed at Roman Stone Works. Users were quick to spam Roman Stone’s employment page with memes, and the page has been temporarily shut down “to ensure the recommendations being left are genuine and follow [Facebook’s] policies.”

The “company time” meme has seen a resurgence recently, with many sharing it and even putting their own spin on the phrase. However, Hidalgo may be the only one to report being fired over the meme. Hidalgo’s Facebook post including his boss’ texts has been shared 2,000 times and has well over 800 comments, and screenshots of his post have been circulating on other social media platforms. Maybe outcry on social media will urge Hidalgo’s boss to reconsider.

The Daily Dot has reached out to Cody Hidalgo and Roman Stone Works for comment.